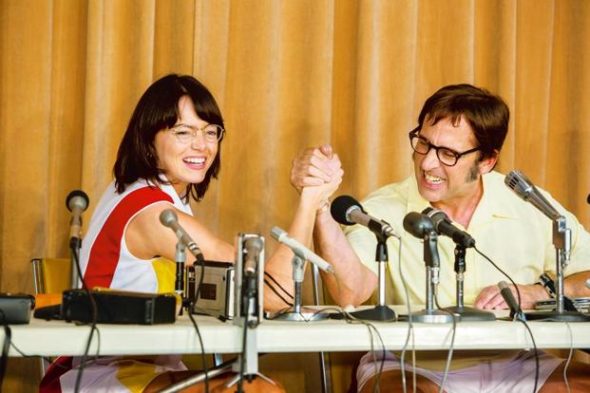 A fight for equality playing out inside sports arenas. Sound familiar? Battle of the Sexes isn’t just an effortlessly engaging piece of entertainment, it’s a compelling reminder that the sporting world has long been intertwined with the social and political movements of the day.

In 1973, Billie Jean King was 29 years old and the leading name in women’s tennis. Bobby Riggs was a 55 year-old former champion who missed the spotlight. As the “women’s lib” movement grew, they met for three sets of tennis that was watched by ninety million people.

A taut script from the Oscar-winning Simon Beaufoy finds marks that often speak directly to today’s “stick to sports” crowd. In one particularly biting scene, a defiant King argues for equal prize money on the women’s circuit, telling the condescending director of the tour (Bill Pullman) that he’s a constant gentleman “until we want a bit of what you’ve got.”

As he was in the actual ’73 event, Riggs is the film’s camera-loving ringmaster, a born huckster who tells a recovery group they don’t need to stop gambling – they just need to get better at it. Steve Carell nails the role, and not just because he has the look and the attitude. In the quieter moments away from the cheering crowds, Carell gives us a faded star in search of purpose, finding the authenticity that Riggs leaned on to remain endearing.

The period details are just right and, thanks to some nifty work by two athletic body doubles, so is the tennis. Faulting only with some fleeting moments of flippancy, Battle of the Sexes wins by serving up both a crowd-pleasing spectacle and the human drama than ultimately made it so much more.