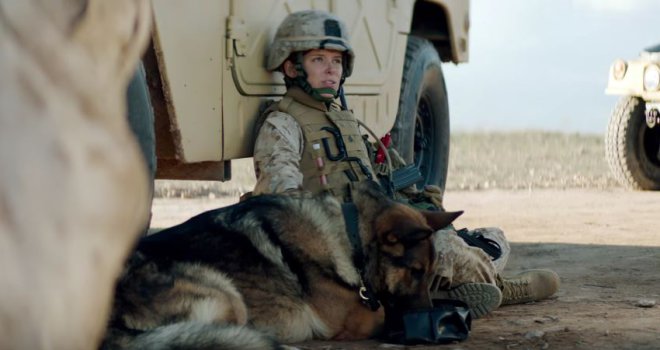 Anchored by the powerful bond between a K-9 Marine and his handler, Megan Leavey is a thoroughly respectful and frequently touching testament to heroes of differing species.

Kate Mara is fantastic as Corporal Leavey, who was twice deployed to Iraq with her bomb-sniffing dog Rex, saving multiple lives until they were both wounded by an improvised explosive. After her return to civilian life, Leavey mounted an impressive campaign to adopt Rex, and was ultimately successful with an assist from her Senator, New York’s Chuck Schumer.

Director Gabriela Cowperthwaite, who nearly brought Sea World to its knees with the documentary Blackfish, builds Megan Leavey with impressive restraint in each of its themes. Never a jingoistic war film, shameless recruiting tool or schmaltzy ode to a dog’s purpose (pun intended), the film, like its subjects, does a job and does it well.

At times tense, loving, and even goosebump-worthy, Megan Leavey is a fine reminder that family comes in all breeds.