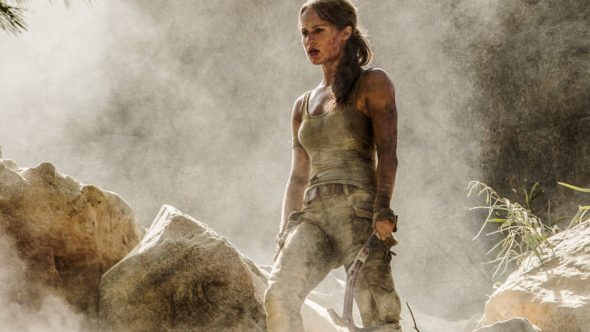 Halfway through the new Tomb Raider, I thought to myself: “Well, you can’t have this kind of movie without those archetypes.” You know the ones: reluctant hero, loyal sidekick, irredeemable bad guy, henchmen with machine guns.

And then I second guessed myself, “Can you?”

It’s not that Tomb Raider ISN’T fun (it is) or exciting (bike races, waterfalls, and bringing a bow to a gunfight, oh my!). It’s just that the relentless action is tired. The few connections between characters are forced or thrown away.

Alicia Vikander (Ex-Machina, The Danish Girl) gets few genuine moments to act, and she crushes it, but director Roar Uthaug seems afraid of the intimacy between Vikander and the camera. Every time she connects with a real emotion, the camera cuts away to a wide shot.

The exposition and key plot points are repeatedly spoon-fed to the audience. Lara Croft (Vikander) has to repeat each clue out loud as she discovers the answer to a riddle. Ugh.

And I’ve never seen a flashback that couldn’t be replaced with better writing. Tomb Raider has a lot of flashbacks.

“But Cat!” You say. “You’re a notorious hater. Didn’t you like anything?”

I’m so glad you asked.

When I sat down in the theatre, I wrote down a few primer questions, betraying my predictions for the film. They were these:

Is the male gaze present? Are the fight scenes realistic or stylized? Does it accurately echo the video game? How is the dialogue? Is there romance or just action? Are there other women in the film? People of color? Is there comedy? Is it predictable?

Good news: the male gaze is noticeably absent and Lara Croft is a genuine badass.

All the hand-to-hand combat feels realistic though many feats are delightfully improbable. Those improbable feats crisply reflect the basic mechanics of a video game: swinging from a hanging rope, traveling hand over hand along a railing, moving quietly through an encampment unnoticed.

There are other women and more diversity than expected, but not enough. A story that starts out vibrantly quickly narrows focus to a bunch of white people (plus sidekicks) fighting over a mystery of the Orient, while laborers (POC) who don’t speak English are gunned down for dramatic effect. #yikes

While I was glad that Lara got to kick ass without any romantic entanglements, I was genuinely disappointed that there wasn’t any real tension between her and Lu Ren (Daniel Wu, a great addition).

In summation, if someone wants to go to the movies this weekend, Tomb Raider is a fine pick. There’s a badass heroine, a handful of chuckles, and enough action to numb your brain for an hour and a half.

But it doesn’t redeem nearly as many sins of its genre as it repeats. It’s a predictable action adventure. No more, no less.