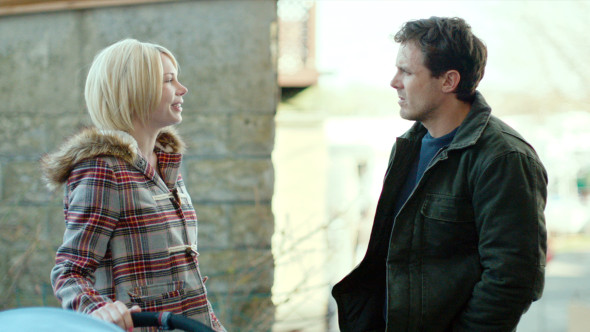 Manchester by the Sea

Manchester by the Sea will put your emotions in a vice and slowly squeeze, buffering waves of monumental sadness with moments of biting humor and brittle affection. Writer/director Kenneth Lonergan crafts a film so deeply felt it can leave you physically tired. A very good kind of tired.

Casey Affleck is a sure Oscar contender as Lee Chandler, a quiet, moody soul content to live in a one room apartment and work as a janitor in suburban Boston. When the call comes about the passing of his older brother Joe (Kyle Chandler), Lee heads to Manchester to attend to family business.

His brother’s will specifies that Lee is to be guardian of Joe’s 16 year-old son Patrick (Lucas Hedges in a crackling, breakout performance), a responsibility Lee is not expecting nor seemingly interested in.

Questions on this family backstory abound, and Lonergan takes his sweet, beautiful time in answering them. After his stellar 2000 debut You Can Count on Me and the ambitious mess of Margaret a year later, with his third feature Lonergan displays a form of storytelling masterfully rooted in subtlety and realism.

Sketches of a narrative take shape without regard for any strict linear structure, and the dense fog of grief within the Chandler family becomes palpable, anchored in Affleck’s tremendous performance. More than just a moody loner, Affleck crafts Lee as a soul unsure if he seeks punishment or absolution, and seemingly content to remain undecided.

The sudden responsibility of Patrick forces Lee to face things he’s run from, and Affleck’s scenes with the young Hedges are filled with wonderfully restrained moments of tenderness and anger. Even better are the sudden bursts of piercing humor, as Lonergan is always two steps ahead of where you think a scene may be going.

The entire supporting cast is uniformly excellent, highlighted by an unforgettable Michelle Williams as Lee’s ex-wife Randi. Despite limited screen time, Williams makes Randi’s own pain visible through her facade, finally airing it in a shattering reunion with her ex husband. A masterclass in film acting from Williams and Affleck, these are moments so full of ache and humanity you’ll be devastated, yet thankful for the experience.

Williams’s small but mighty performance pierces the film’s admittedly male-centric worldview. The other female characters are more broadly drawn in negative lights, yet this reinforces the sad cycle of emotional immaturity in danger of being passed on to another Chandler man. In the end, Manchester by the Sea is a hopeful ode to breaking these barriers, and enduring in the face of the worst that life can bring.