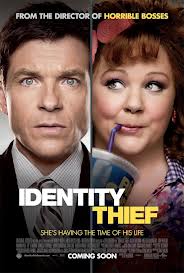 As far back as his childhood days in the 80s as Ricky Schroder’s wise-cracking friend Derek on Silver Spoons, Jason Bateman has displayed flawless comic timing. Melissa McCarthy, on the other hand, has burst on the scene in the last few years, with 2011’s Bridesmaids firmly establishing her as a major comic talent.

Put them together in a road picture, and you’ve got comedy gold, right? Well….

Don’t get me wrong, Identity Thief does deliver some laughs, just not as many as these  two stars would suggest.

Bateman is Sandy Patterson, a financial manager in Denver who deflects constant comments about his first name (“it’s not feminine, it’s unisex!”) while wondering if his jump to a new job at a start-up firm is a good move for his growing family.

McCarthy is also Sandy Paterson, the illegal Florida version. That is, after she makes him her latest identity theft victim and starts racking up credit card bills and arrest records in his name.

As the real Sandy discovers why his life is unraveling, he hatches a plan to travel South and bring the veteran conwoman back to Colorado authorities so she can prove his innocence.

After some great moments of physical comedy as Bateman struggles to apprehend McCarthy, the film settles in as a cross between Planes, Trains and Automobiles and Due Date.

Director Seth Gordon, fresh from the very funny Horrible Bosses (also with Bateman), does his best to bring the same breezy, ad-libbed approach to his latest, and that is a wise move. Writer Craig Mazin’s script, weak on its own, is rescued by the sheer talent of the two leads.  Even when the story makes the inevitable turn toward sentimentality, Bateman and McCarthy keep it from collapsing.

← Side Effects may include unusual career choices
If this Snake has an Ass, Jet Li will Find and Kick It →
Scroll Up