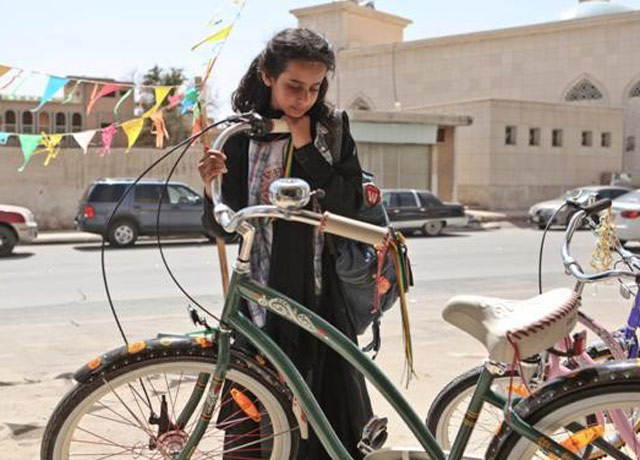 Focusing on a young girl who masquerades as someone she’s not, Wadjda takes aim at the patriarchal elements of Saudi Arabia, where a conservative interpretation of Islam prevents women from even obtaining driver’s licenses.

Wadjda (an irresistible Waad Mohammed) is easy to spot in her all-girl school—she’s the one wearing worn sneakers under her ankle-length uniform. Though she would be a typical preteen in most parts of the world, Wadjda’s love of pop music and her tomboyish adventures with boy pal Abdullah (Abdullrahman Al Gohani) mark her as a rebel in the school’s repressive atmosphere.

Then two things happen that change her life: (1) She spots a beautiful bicycle that she decides she must have, even though cycling is considered hazardous to a girl’s virtue. And (2) the school announces a Quran competition whose prize money is almost identical to the bike’s cost. The enterprising girl immediately undertakes a study of Islam’s holy book, fooling the school’s staff into thinking she’s suddenly found religion.

Directed by Haifaa Al Mansour, the film also focuses on Wadjda’s mother (Reem Abdullah), a woman with her own set of problems. She attempts to live by her society’s strict rules, which mean covering up from head to toe and hiring a foreign-born driver when she wants to venture outside the home. But she’s increasingly feeling the sting of patriarchy, particularly because her loving but largely absent husband (Sultan Al Asaaf) is planning to take a second wife who can give him the son he needs to carry on his bloodline.

The mother’s emotional conflicts are shown in subtle ways, as in the primping she engages in before putting on a garment that hides her handiwork from the public. Similarly, Wadjda’s feelings toward her situation—her father’s imminent remarriage and the increasing strictures she’s expected to follow—must be gleaned from her expressive eyes.

Wadjda carries two distinctions: It’s the first full-length film made entirely in Saudi Arabia, and it’s the first feature directed by a Saudi woman. But its most important distinction is the disarming and subtly powerful way in which it depicts the ordeal of growing up female in a patriarchal society.