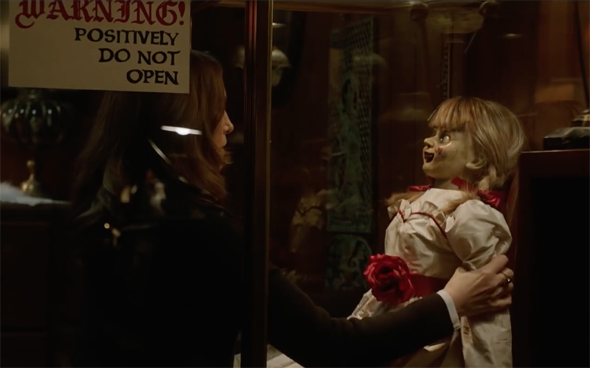 The first conflict, first specter of the Conjuring universe was a hideous, braid-wearing doll haunting hip Seventies roommates. Ever wonder what happened after Lorraine and Ed Warren (Vera Farmiga and Patrick Wilson, respectively) removed the cursed doll Annabelle from the girls’ apartment?

It was a hell of a ride home, I will tell you that.

Truth is, the Annabelle franchise within the larger Conjuring property hasn’t really impressed. John R. Leonetti’s lackluster 2014 “save the baby” horror that gave the doll its own series fell flat. Three years later, David F. Sandberg’s Annabelle: Creation offered an origin story that knew absolutely nothing at all about its own religious setting, yet offered considerably stronger action, scares and gore than its predecessor.

Writer Gary Dauberman, who’s penned every installment (as well as It, which seriously amplifies his credibility), takes on directing duties for the first time with the third film, Annabelle Comes Home.

Again, this one is a little better than the last one.

Dauberman gives us a spooky fun glimpse into the reasons the Warrens kept the doll locked away back in their room of cursed objects. From that first road trip home—which is a blast straight out of Hammer or Michael Jackson’s Thriller—the film is a spooky fun ode to old fashioned horror.

Back at home—the very home where the Warrens illogically keep demonic objects—their daughter Judy (McKenna Grace, really good in this role) is going through some troubles with schoolmates who think her parents are creepy.

So, creepy Ed and Lorraine leave town, likely to cast a demon into a Combat Carl they’ll be adding to the back room toybox, leaving little Judy with a cherubic babysitter Mary Ellen (Madison Iseman) and her snoopy bestie, Daniela (Katie Sarife).

What does Daniela touch in the off-limits, demon-filled back room?

Dauberman shows some fun instincts when it comes to isolating characters to make the most of his thrill ride setting. The logic comes and goes with ease, however—once the catalyst kicks in, each scene exists simply to trigger a scare, not to make any narrative sense.

But it is fun, with generous writing that does not ask us to root against any of the kids, and performances that are far superior to the content. Plus a couple of real laughs, mostly thanks to a randomly hilarious pizza delivery guy.

Annabelle Comes Home is no masterpiece and it is definitely a tonal shift from the previous installments, but it’s a mindless PG-13 blast of haunted house summer fun.