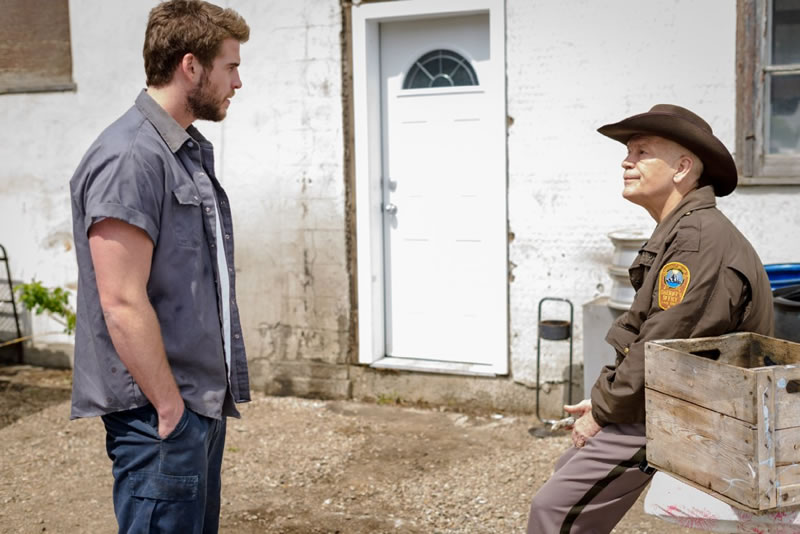 Pulpy from the get go, Cut Bank is an oddly interesting crime drama, seemingly inspired by several recent genre classics and held together by a well-seasoned cast having fun with some classic film noir archetypes.

It starts with the restless Dwayne (Liam Hemsworth) and his spunky girlfriend Cassandra (Teresa Palmer), who are out standing in a Cut Bank, Montana field with a camcorder. She’s practicing her speech for the upcoming Miss Cut Bank pageant and he’s filming it when suddenly, Dwayne also captures the murder of longtime town mailman Georgie (Bruce Dern).

Wouldn’t you know it, there’s a big reward for evidence in the murder of any postal worker, and Cassandra’s surly father (Billy Bob Thorton) sniffs out the plan right quick. So does local recluse Derby Milton (Michael Stuhlbarg, stealing the film), who really wants a certain package that is still in Georgie’s stolen mail truck. From there, things begin unraveling in an increasingly bloody fashion, much to chagrin of the folksy Sheriff Vogel (John Malkovich).

Both director Matt Shakman and writer Robert Patino are television vets moving to the big screen, and it’s easy to imagine their film springing from notes taken while watching Fargo, A Simple Plan, No Country for Old Men or even Sling Blade. Those are some high aspirations to be sure, and it would have been advisable to make the homages a little less transparent.

Even the cast provides an ironic catch-22. The charisma-free Hemsworth aside, these are veteran talents going toe to toe and it’s a kick to watch, so that’s good. But collectively they provide very few degrees of separation from any of the films Cut Bank resembles, making it even harder for the film to measure up.

Still, it might have beaten the odds had Shakman been able to find a consistent tone. Though always watchable, it isn’t clear if Cut Bank wants to be a dark comedy or a true noir thriller, so it’s never urgent enough to be compelling. Solid footing always seems just out of reach, leaving the film in that murky middle that is seldom satisfying.