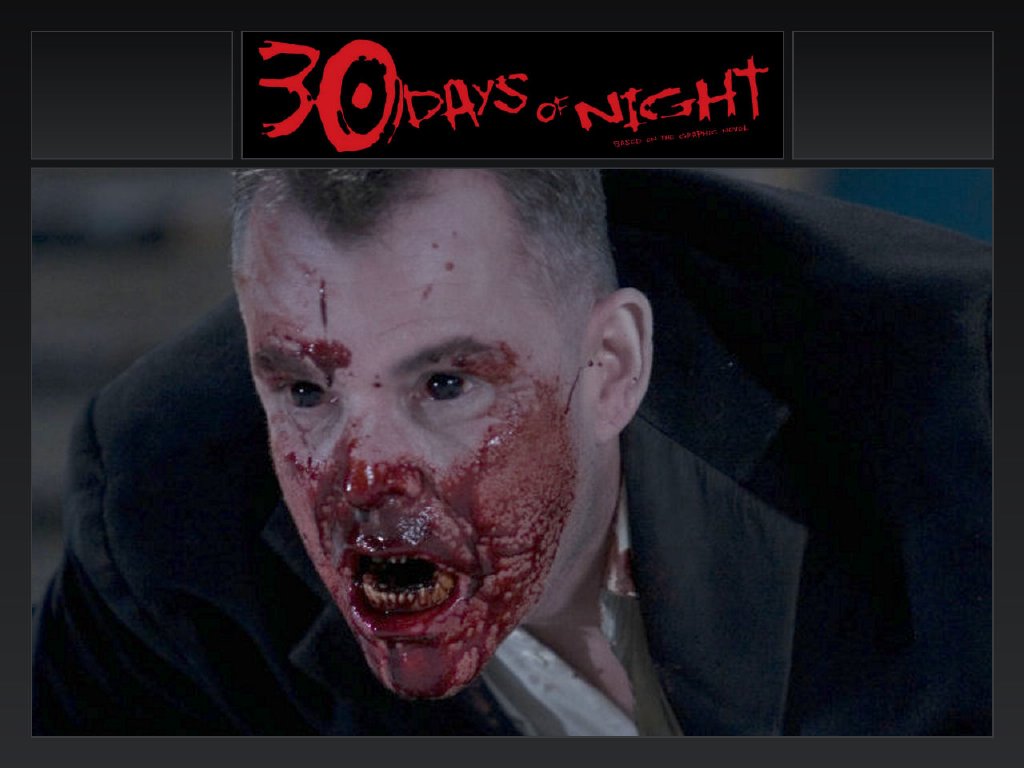 If vampires can only come out at night, wouldn’t it make sense for them to head to the parts of the globe that remain under cover of darkness for weeks on end? Sure it would. And, given that those particular spots tend to be frozen death traps to begin with, more to love about this particular icy bloodsucking adventure!

The first potential downfall here is that Josh Hartnett plays our lead, the small town arctic sheriff whose burg goes haywire just after the last flight for a month leaves town. A drifter blows into town (Ben Foster – a bit over the top, but always a welcome sight) – and this is a town that sees a lot more snowmen than drifters. Dogs die viciously. Vehicles are disabled. Power is disrupted. You know what that means…the hunt’s begun.

Hartnett, a characteristically weak actor, holds up OK upon the frozen tundra. He’s asked to guide us through the action and little more, which is as it should be. Director David Slade keeps the pace quick and the action mean.

Much of his success is due to the always spectacular Danny Huston as the leader of the bloodsuckers. His whole gang takes a novel, unwholesome approach to the idea of vampire, and it works marvelously.

Slade cheats several times, like every time Hartnett’s chased by a vampire. One cut, they’re right behind him, the next cut, he’s hiding successfully beside some barn. What the…?

Still, Slade builds the pervasive feeling of being cornered with no way out, and more than once, the baddies employ rather ruthless measures to flush out those in hiding.

A pod of survivors hides in an attic, careful not to make any noise or draw any attention to themselves. One old man has dementia, which generates a lot of tension in the group, since he’s hard to contain and keep quiet.

There’s no knowing whether the town has any other survivors, and some of these guys are getting itchy. Then they hear a small voice outside.

Walking and sobbing down the main drag is a little girl, crying for help. It’s as pathetic a scene as any in such a film, and it may be the first moment in the picture where you identify with the trapped, who must do the unthinkable. Because, what would you do?

As the would-be heroes in the attic begin to understand this ploy, the camera on the street pulls back to show Danny Huston and crew perched atop the nearby buildings. The sobbing tot amounts to the worm on their reel.