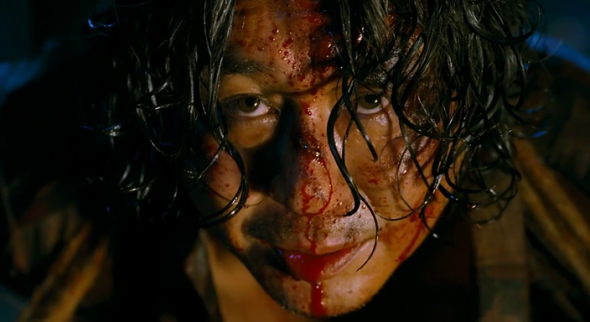 With the help of two strong leads, he upends the old “if I want to catch evil, I must become evil” cliché. What they’ve created is a percussively violent horror show that transcends its gory content to tell a fascinating, if repellant, tale.

Kyung-Chul – part time school bus driver, full time psychopath – butchers Kim’s gal, but rather than killing the murderer when he gets the chance, Kim beats him within an inch of his life (in very graphic fashion), then implants a microphone and tracking device. Regardless of the mayhem this lunatic will unleash as soon as he recovers from his wounds, Kim’s content to simply wait, follow, and beat him up again.

Park’s plot takes a number of unexpected, even absurd, turns. It’s as if this particular movie stops off quickly to visit a couple of completely separate horror films. The result doesn’t always work, but it certainly shakes up expectations.

Truth be told, beneath the grisly, far-too-realistic violence of this unwholesome bloodletting is an undercurrent of honest human pathos – not just sadism, but sadness, anger, and the most weirdly dark humor.

If you can see past the outrageously violent images onscreen, you might notice some really fine acting and nimble storytelling lurking inside this bloodbath.