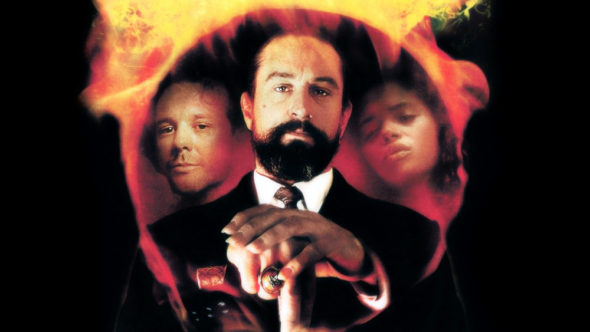 No genre has more invested in the twist ending – in being able to pull the rug out from under you at the last possible second – than horror. The best are the films that truly sneak up on you, making you re-examine everything that preceded the surprise.

Andy Ussery of Black Cat’s Shadow podcast joins us and he has an entirely different list of movies – that’s how many there are! Kind of makes you want to listen to the podcast HERE, doesn’t it?

Is it a brilliant movie? Will George be happy it made the list? That’s a lot of no right there, but honestly, how do we not acknowledge this stroke of genius?

Alan Parker directed Pink Floyd: The Wall. That has literally nothing to do with this list, but still.

In Angel Heart, Parker develops a steamy, lurid atmosphere as we follow private dick Harold Angel (Mickey Rourke) through the bowels of New Orleans in search of information on crooner Johnny Favorite.

Rourke’s performance is key to the film’s unseemly feel. A sinner – never a traditional hero – still, Angel’s sympathetic and full of a disheveled charm. You’re sorry for him even as you know he’s outmatched and probably undeserving of your pity. He knows it, too, and that’s what makes the performance so strong.

That, and the sheer diabolical presence of an unsettlingly understated Robert DeNiro. That hard boiled egg thing! Love!!

Bloodshed on the bayou – languid and unseemly.

Paxton stars as a widowed dad awakened one night by an angel – or a bright light shining off the angel on top of a trophy on his ramshackle bedroom bookcase. Whichever – he understands now that he and his sons have been called by God to kill demons.

Brent Hanley’s sly screenplay evokes nostalgic familiarity, and Paxton’s direction makes you feel entirely comfortable in these common surroundings. Then the two of them upend everything – repeatedly – until it’s as if they’ve challenged your expectations, biases, and your own childhood to boot.

h, you totally didn’t figure it out. Don’t even start.