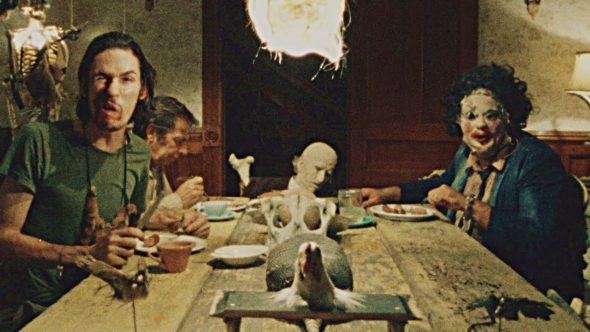 Our son Donovan joins us this episode, so obviously the best idea is to look into horror movie families that make ours look downright wholesome. Check out the boy’s band, NEW PLAGUE RADIO!

Forget Pollyanna McIntosh for one minute (if that’s even possible). One of many reasons that Lucky McKee’s powerhouse of horror is so memorable is that McIntosh’s feral cannibal (who must smell awful) is not the scariest person on screen.

There’s something not quite right about Chris Cleese (an unsettlingly cherubic Sean Bridgers), and his family’s uber-wholesomeness is clearly suspect. This becomes evident once Chris hunts down a wild woman, chains her, and invites the family to help him “civilize” her.

It doesn’t go that well for anybody, really, in a film rethinks family.

Poor, unlikeable Franklin Hardesty, his pretty sister Sally, and a few other friends head out to Grampa Hardesty’s final resting place after hearing the news of some Texas cemeteries being grave-robbed. They just want to make sure Grampy’s still resting in peace – an adventure which eventually leads to most of them making a second trip to a cemetery.

But that’s not the family we’re after. The clan that will come to be known as the Sawyers begin humbly enough in Toby Hooper’s original nightmare: a cook, a hitchhiker, a handyman of sorts, and of course, Grandpa.

There are so many moments to recall. Maybe it’s the slamming metal door, or the hanging meat hook, or the now iconic image of the hysterical and blood-soaked Sally Hardesty hugging the back of a pick up truck bed as the vehicle speeds away from Leatherface.

Or maybe it’s dinner, when Hooper really gives us some family context. He uses extreme close up on Sally’s eyeball as she takes in the bickering family lunacy of a dinner table quite unlike any we’d seen before.

What is wrong with this guy?! And it’s not just him. Turns out his kids are pretty seriously messed up as well. But fear not (or fear a lot) because Grace has some profound family dysfunction to fall back on, and pretty soon it’s just a guess as to who’s going to out-dysfunction the other.

Jorge Michel Grau’s We Are What We Are is among the finest family dramas or social commentaries of 2010. Blend into that drama some deep perversity, spooky ambiguities and mysteries, deftly handled acting, and a lot of freaky shit and you have hardly the goriest film ever made about cannibals, but perhaps the most relevant.

Writer/director Julia Ducournau has her cagey way with the same themes that populate any coming-of-age story – pressure to conform, peer pressure generally, societal order and sexual hysteria. Here all take on a sly, macabre humor that’s both refreshing and unsettling.

Because what we learn is not just that Justine’s sister will not be a good mentor, or that there is definitely something wrong with Justine. By the blackly hilarious final moments on the screen, we see the big family portrait.