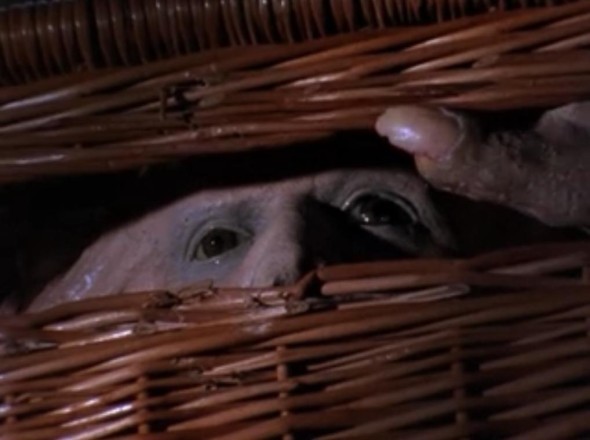 For whatever reason, filmmakers and moviegoers alike seem to find twins inherently creepy. Would The Shining have been as menacing if it were just another child trying to lure Danny to his death? No – for some reason what’s particularly terrifying is the image of those two identical girls waving and beckoning, “Come play with us, Danny…”

It’s as if they’ve conspired. You’re outnumbered. There’s the idea that they’re doppelgangers able to fool the rest of us, that or they are two half beings unable to live without the other and yet perhaps quietly desperate to try.

We’ve enlisted the help of Senior Twin Correspondent Joy Madden (she’s Hope’s evil twin, FYI) to puzzle through the best in twin horror. Unlike The Shining, though, twins are the centerpiece of these films and it is their very twin-ness that drives the story.

This film is fed by a particularly twin-linked anxiety. Can anyone really be the love of one twin’s life, and if so, where does that leave the other twin? More than that, though, the idea of separating conjoined twins is just irresistible to dark fantasy. Rock bottom production values and ridiculous FX combine with the absurdist concept and poor acting to result in an entertaining splatter comedy a bit like Peter Jackson’s early work.

When super-wholesome teenage Duane moves into a cheap and dangerous New York flophouse, it’s easy to become anxious for him. But that’s not laundry in his basket, Belial is in the basket -Duane’s deformed, angry, bloodthirsty, jealous twin brother – but not just a twin, a formerly conjoined twin. What he really is, of course, is Duane’s id – his Hyde, his Hulk, his Danny DeVito. And together the brothers tear a bloody, vengeful rip in the fabric of family life.

We’re all probably familiar with director Brian De Palma’s long and sometimes tiresome journey through his own person obsessions with Alfred Hitchcock. He married Hitch’s high-tension score and murder mystery plotlines with Mario Bava’s sexualized violence to create his own hybrid, which began with this twin sister trauma.

French Canadian model Danielle (Margot Kidder) may or may not have a once-conjoined twin who may or may not be a diabolical killer in this “is she or isn’t she” mind bender. Separation anxiety and a general nervousness about twins as an alien concept fuel this murder mystery that takes some hard left turns – some novel, some now clichéd. Whatever the flaws, though, De Palma’s panache and Hitchcockisms are in full bloom in this stylish, often creepy thriller.

The film is about separation anxiety, with the effortlessly melancholy Jeremy Irons playing a set of gynecologist twins on a downward spiral. Cronenberg doesn’t consider this a horror film at all. Truth is, because the twin brothers facing emotional and mental collapse are gynecologists, Cronenberg is wrong.

Irons is brilliant as Elliot and Beverly Mantle, bringing such flair and, eventually, childlike charm to the performance you feel almost grateful. Like some of the greats, he manages to create two very distinct yet appropriately linked personalities, and Cronenberg’s interest is the deeply painful power shift as they try and fail to find independence from the other. The film’s pace is slow and its horror subtle, but the uncomfortable moments are peculiarly, artfully Cronenberg.

Inside this elegantly filmed environment, where sun dappled fields lead to leafy forests, the filmmakers mine a kind of primal childhood fear. The filmmakers’ graceful storytelling leads you down one path before utterly upending everything you think you know. They never spoon feed you information, depending instead on your astute observation – a refreshing approach in this genre.

Performances by young brothers Lukas and Elias Schwarz compel interest, while Susanne Wuest’s cagey turn as the boys’ mother propels the mystery. It’s a hypnotic, bucolic adventure as visually arresting as it is utterly creepy. The film is going to go where you don’t expect it to go, even if you expect you’ve uncovered its secrets.

Director Robert Mulligan (To Kill a Mockingbird) is a master of slow reveal, feeding us information as we need it and pulling no punches in the meantime. It’s rural 1930s, and one hearty farm family has withstood a lot. Ever since Dad died last summer, seems like every time you turn around there’s some crazy mishap. And yet, the farm still goes on – there’s always a pie in the oven and a cow that needs milking. Still, Ada (Uta Hagen), the sturdy German matriarch, is troubled. Sweet, stout young Niles seems terribly confused about his twin, Holland.

Mulligan turns to that same nostalgic, heartland approach he used so beautifully with Mockingbird to inform a stunningly crafted, understated film that sneaks up on you. He creates what is likely the most effective and troubling film you’ll see about twins.