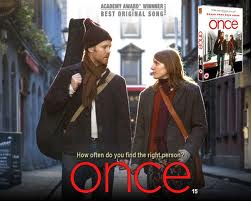 Nothing so great releases to DVD this week (yes, Life of Pi does, but really, it was the glorious big screen 3D that made it worth seeing) so we thought, why not make some recommendations for the holiday? You can do more on St. Patrick’s Day than drink yourself into oblivion, like watch some fascinating Irish movies. Although, to be honest, there’s a fair amount of drinking going on here, too.

Let’s start with 2006’s Once, because, it addition to being a great film, it proves there’s more to Irish music then tales of death, dismemberment, and death by dismemberment. Glen Hansard and Marketta Irglova (known on real-life concert stages as “The Swell Season”) star as unnamed musicians who, during one eventful week in Dublin, document their feelings toward each other via song. Once is a graceful, life-affirming story that succeeds where so many other have failed. It explores the mysteries of love and the wonder of music, while never sacrificing an ounce of realism.

Knuckle (2011) is the fascinating if uneven documentary about “fairfights” held among Ireland’s Traveler community. (Don’t call them gypsies.) The closed community opens up to filmmaker Ian Palmer about these wager-dependent, bare knuckle bouts meant to resolve blood feuds among clans. They seem lumbering, unchoreographed, and brutish to viewers accustomed to Hollywood bouts, but fascinating nonetheless. Filming for more than a decade, Palmer uncovers something insightful about the Traveler culture, and perhaps about masculinity or warmongering at its most basic.

In The Guard (2011)–  a very Irish take on the buddy cop movie – a dream cast anchored by the ever-reliable Brendan Gleeson wryly articulates a tale of underestimation and police corruption. Gleeson is a joy to behold. His dry wit and take-me-as-I-am approach produce a world class curmudgeon, to which the also excellent (as always) Don Cheadle plays a perfect foil. Truth be told, the story is a bit of an afterthought. The Guard is a celebration of tart Irish humor and character; the actual plot merely provides the playground for the fun.

Rudy (1993) Okay, fine, here’s Rudy. This is the film debut of Vince Vaughn, who co-starred with Aniston in..what movie?

The Break-Up, correct! Now do a shot of Jameson, smartypants!