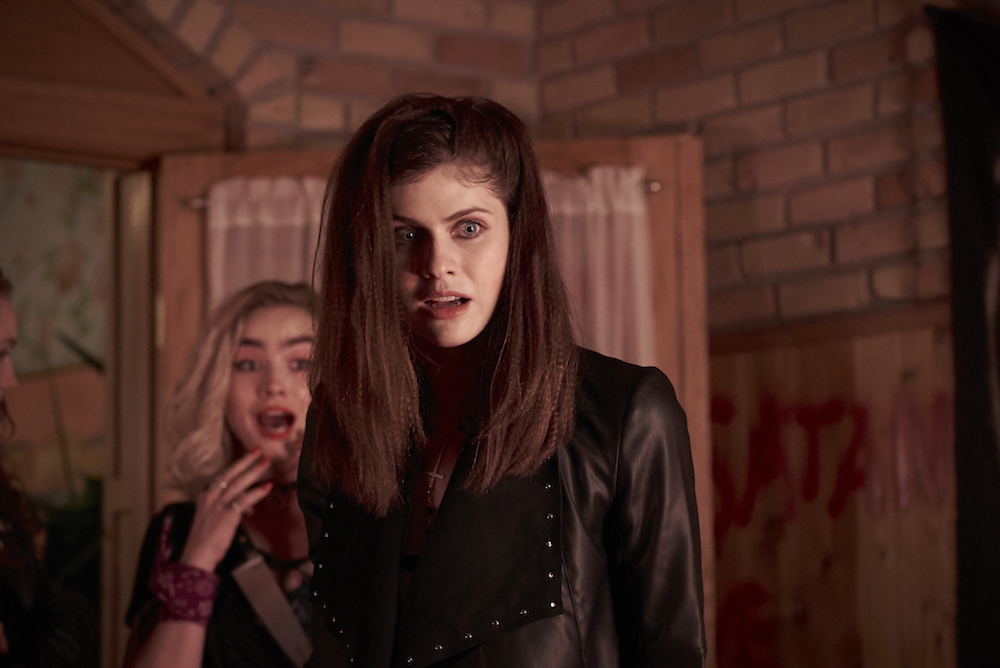 We Summon the Darkness

The year was 1988, and as far as you know, metal bands shouted “hail Satan” and evangelicals took to the airwaves warning their flocks about cults driven to spill virtuous blood.

Marc Meyers (My Friend Dahmer) jumps in the way back machine to road trip with three besties headed to a rock show. Alexis (Alexandra Daddario), Val (Maddie Hasson) and Bev (Amy Forsyth) are rockin’ like Dokken with those bare midriff black tees and upside down cross dangles, but something’s amiss.

For one thing, their hair is not nearly obnoxious enough. No way they’re en route to a rock concert in ’88. No one’s hair even grazes the car ceiling.

Also, that trio of dudes they’re flirting with (at least one of them is mulleted, so there is a whiff of authenticity) is clearly beneath them. Plus, with this nationwide ritualistic Satanic killing spree going on…

Here’s the thing, though. I was actually alive in rural Ohio in the late Eighties, and there honestly were people—like, people in authority—who believed our corn fields were lousy with covens. They believed metal music transmitted the words of the dark lord to the eager ears of teens.

Hasson charms as the hot friend with a weak bladder. While the banter never feels quite fresh enough to be improvisational, the dialog among the three girls is random, comfortable fun.

Daddario and Hasson share a silly chemistry that keeps scenes bright and engaging, even when the slight plot begins to wear through.

In its best moments, We Summon the Darkness conjures Kevin Smith’s Red State (an underseen and under-appreciated horror gem). Johnny Knoxville plays intriguingly against type as the Midwestern pastor warning youngsters about the lures of the devil, and Daddario has enough screen presence to anchor the movie.

There’s just not a lot to see here. Pretty girls. Terrible music. Worse clothes. Religious zealots. Backwards thinking. Friends who drive you crazy on a road trip because they have to stop every ten minutes to pee.

Yes, that does sound like 1988 to me, actually. It’s just too bad Meyers couldn’t deliver the kind of inspired, memorable scares born of high school relationships, weirdos and misfits he shared in My Friend Dahmer. Instead the camaraderie and atmosphere become entertaining distractions from a forgettable story.