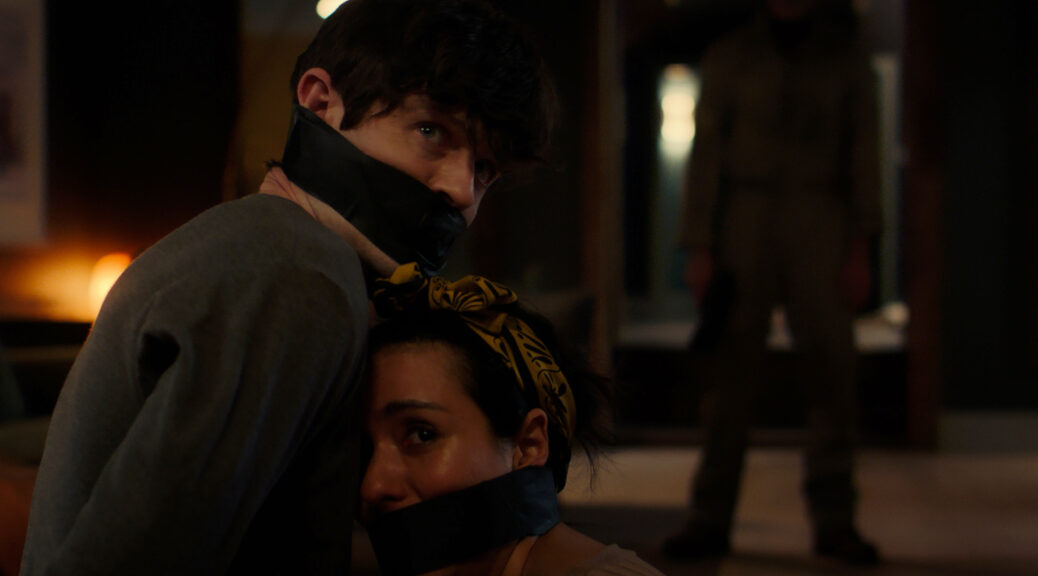 Why is the dinner party such a ripe concept for horror? Or at least trauma?

Indies It’s a Disaster and Coherence bend time and space. The Invitation takes things in a bloody direction, The Humans picked more familial scabs. What they all have in common is that intimate gathering where familiarity breeds contempt.

They also require few locations and minimal cast, so they’re not too tough to mount on a small budget.

Director/co-writer Charles Dorfman takes all that into consideration with his feature debut. A veteran producer, Dorfman co-writes this fearsome tale with another longtime producer making his creative debut, Statten Roeg.

Together they spin the story of birthday boy Adam (Iwan Rheon, Game of Thrones). He and girlfriend Eva (Catalina Sandino Moreno) await their two guests. Eva is a sculptor, and she and Adam have been living in the first of what will be many exclusive new homes developed on ancient, isolated, mystical UK land.

The developer, Lucas (Tom Cullen and his exceptional beard), is Adam’s polar opposite: narcissistic, ambitious, full of shit. Today Eva unveils her big sculpture, she and Adam sign final paperwork to own the house, and Adam blows out the candles on his dream of making it as a director in London in favor of quiet country life.

Well, maybe not because a) Lucas has had another offer, and b) masked intruders threaten the whole evening.

With its monolith and fertility festival masks, the film not-so-subtly conjures 2001: A Space Odyssey and The Wicker Man. It can’t deliver on either promise, though.

More problematic is the way Dorfman discards the themes and character development so carefully articulated in the first half of the film. The fact that the invasion itself never matches the tension of the simple dinner —what with its evasions, lies, manipulations — becomes Dormfan’s biggest problem. At dinner, the filmmaker tends to the themes of the film, twisting discomfort into a knot that’s too easily untied by some intruders in animal masks.