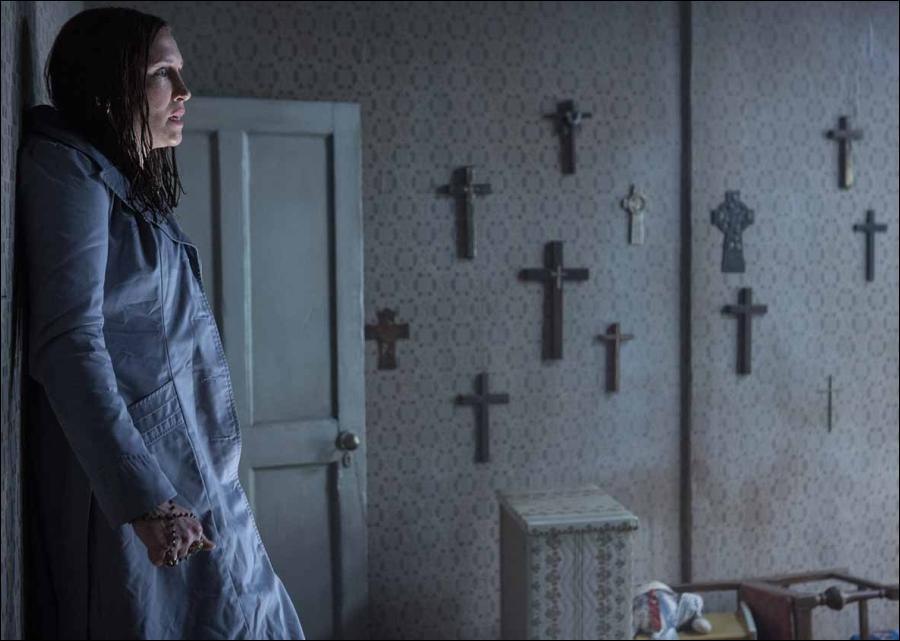 The thing that made James Wan’s 2013 ghost story The Conjuring so effective – more than the solid cast, more than the tense atmosphere, more than those hideous Seventies fashions – was Wan’s use of practical effects.

That woman on top of the wardrobe?! Terrifying!

It helped that he had a creepy story in the hands of capable actors. More importantly, he knows how to frame scenes in a way that trains the audience to scan corners, peer into shadows and look through empty windows, constantly on edge waiting for that next spooky moment.

With his sequel, he still boasts two of those three elements.

Vera Farmiga and Patrick Wilson return as Lorraine and Ed Warren, real-life paranormal investigators working with the Catholic church to validate claims of hauntings and possessions. It’s 1977, and the two are still recovering from that incident in Amityville when they’re asked to help a single mum with four kids living in North London.

The put-upon family is sympathetic enough. Wilson and Farmiga are compelling enough. The period detail is nice. Well, The Clash’s London Calling wasn’t actually released until 1979, but all is forgiven because of the utterly fantastic use of Starsky & Hutch posters.

The story never feels particularly cohesive – more like a series of vignettes strung together. Because of this, characters never seem fully formed and relationships feel forced. Supernatural clues and plot twists border on the nonsensical. (Seriously, ask yourself about the bite marks.) Maybe that’s because there’s a red herring, but too much valuable time is wasted with that thread and not enough devoted to true scares.

There are two demonic images in the film – both excellently chosen nightmare images from childhood (mine, anyway) – but some video game editing and CGI identify them quickly as movie magic, leeching their power.

Most importantly, there’s no inspired, memorable, terrifying jump scare. Wan is an absolute master of the spooky longshot, the creeping camera, but in this film’s predecessor those unendurably tense spans were punctuated by some of the best spook house scares in recent memory. Think clapping hands.

Though there are some startles and above-average scares, there’s nothing to elevate this film above mediocrity.