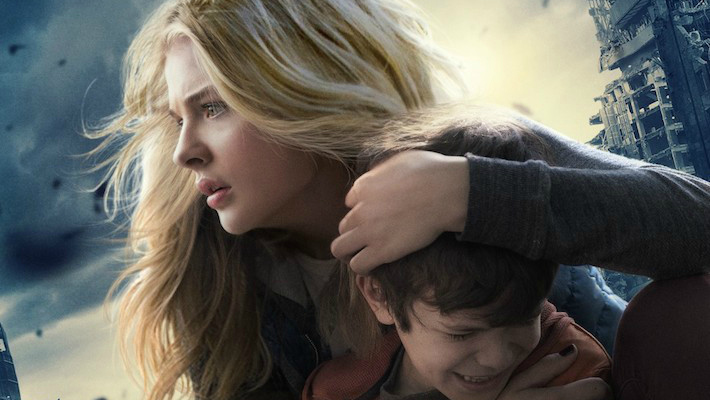 You know the old slam on modern art, right?

“I could paint that!’

Everything about The 5th Wave is so cooly calculated, it feels like the result of watching “young adult” trilogies rake in millions, and copping that same attitude.

All the building blocks are here, but like so many of the other imitators, the finished product just reminds you again how much more effective The Hunger Games is at assembling them.

Cassie (Chloe Grace Moretz) is just a normal teenage girl in Ohio when the first wave of alien attacks hits. The incredibly lazy device of voiceover narration assures girls in the audience Cassie is just like them, so the film’s extended metaphor about surviving adolescence will resonate more quickly.

Cassie is conveniently separated from her parents, and she has a young sibling to protect, so those two boxes are quickly checked off. A love triangle you say? Cassie pines for her high school crush Ben (Nick Robinson), but then the hunky Evan (Alex Roe) saves her after she takes a bullet, and the aliens apparently haven’t touched his supply of hair gel or workout equipment so..conflicted emotions!

Even with all the usual trappings, there are possibilities hiding in The 5th Wave. Rick Yancey’s source novel includes a twist that could have been mined for effective social commentary, no matter how quickly you see it coming (hint: quickly).

Director J Blakeson (The Descent: Part 2) and his screenwriting team seem more interested in just feeding the YA beast. There’s no emotional payoff here, only cliched dialogue and convoluted padding to set up future installments, plus one unintentionally hilarious scene that metaphorically depicts teen sex.

Moretz has talent, and her charisma does manage to sell some of the action sequences, but as was the case with the woeful If I Stay, she plays down to the material and forgoes depth for mere posing. Her young co-stars are just more window dressing, but at least Maika Monroe (so good last year in It Follows) gets to say, to a barracks full of young soldiers being trained for alien battle, “Any of you touch me….and I’ll kill ya!”

Five bucks if you yell, “Lighten up, Francis!” at the screen.

Sorry, kids, that a reference to a stone-age movie called Stripes. Your parents will understand, and tell them to watch that again while you watch The 5th Wave.