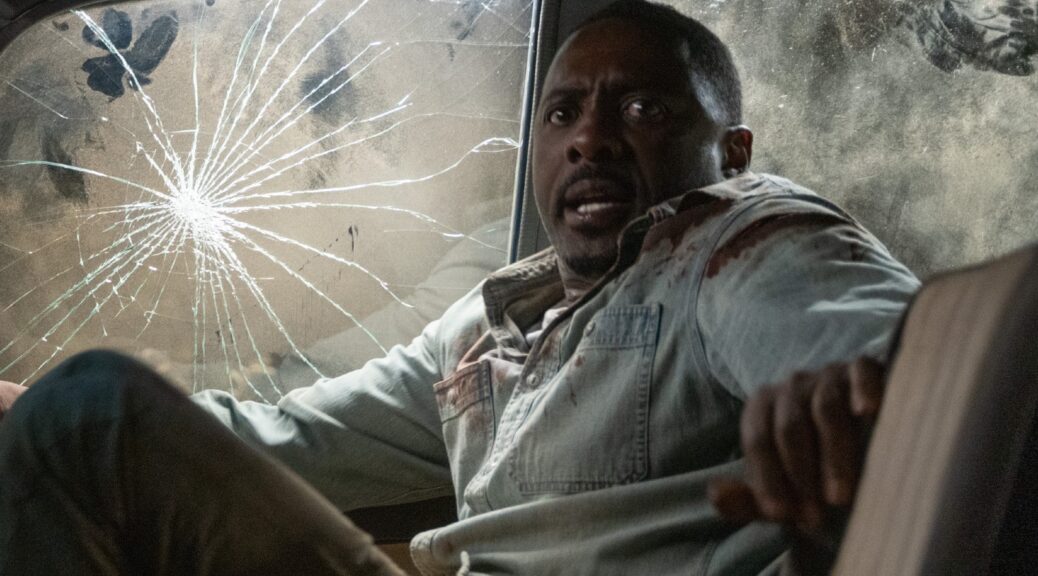 Idris Elba fights a lion. I don’t know what more you want from a movie.

Elba plays Dr. Nate Samuels, on a trip with his daughters to visit his late wife’s stomping grounds, the bush in South Africa. He and the girls (Leah Jeffries and Iyana Halley) had become somewhat estranged during their mother’s illness, and he hopes that staying with family friend Martin (Sharlto Copley) and touring the animal reserve he manages will help them all heal.

It’s more likely to kill them, as it turns out, because poachers have pissed off a really big lion and he’s gone all Jaws IV on the lot of them.

How is Mr. Elba? He’s very handsome. Dreamy, even. He’s also weirdly believable as a vulnerable widower, protective dad, capable doctor and badass who kicks lions in the face.

And he’s not the only one kicking lions, either. Halley gets some badassery in as well, as does Copley. Copley also takes a lot of abuse. Jeffries gets to be the smart one in a film unafraid to deliver teenage girls with agency.

This is not to say Beast is a great film. It borrows a great deal from a great many films: Jaws and Cujo most notably.

Director Baltasar Kormákur is an interesting filmmaker, able to produce smart, visceral thrillers like The Oath. Even his more flawed films —Contraband, 2 Guns, Everest, Adrift — make a valiant attempt at more than action for the sake of action. It helps when he writes. He doesn’t write this one.

Ryan Engle writes this one, and he’s not especially good, as a rule. He’s not terrible. His previous efforts — Non-Stop, The Commuter, Rampage, Breaking In — range from mediocre to poor. But Kormákur pulls a few tricks to elevate this material.

Firstly, he turns genre tropes on end by bringing a Black family to Africa and having their white guide be their wise mentor. Beyond that, there are not a lot of surprises, just a competent if uninspired adventure thriller in which Idris Elba fights a lion.