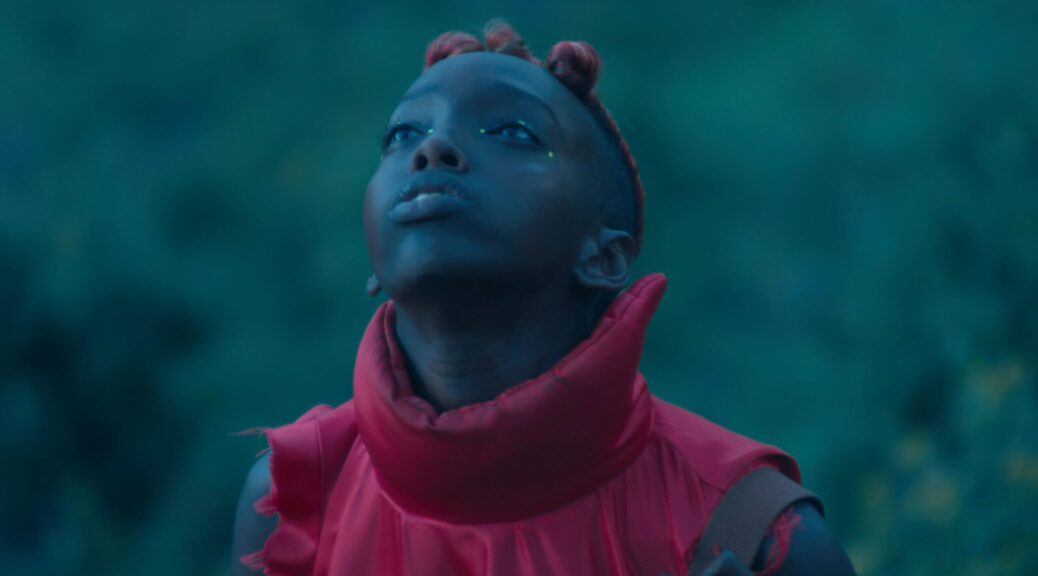 Drawn by common dreams, individuals from all around post-war Rwanda journey to a place, time and reality they can call their own in Anisia Uzeyman and Saul Williams’s Afrofuturistic musical, Neptune Frost.

The nightmare of war in the recent past, the oppressive religion, and the reality of the economy take shape on the screen. What is Rwanda today?

Williams and Uzeyman use something that feels like performance art to depict Africa’s place in technology’s journey to consumers. Tech’s raw materials—from the coltan (a raw material used in electronics) characters mine to computer refuse strewn and useless across the landscape—are woven into different character costumes.

Visually stunning, the aesthetic emphasizes the story’s earthy yet techno quality. Bursts of color and texture in costume design, in particular, along with surreal, day-glo dream sequences are gorgeous.

At the same time, the filmmakers braid together varying uses for the word binary. An obvious term in relation to the lo-fi tech landscape, the word takes a more complicated meaning with the fluid presence of Motherboard, played at first by Elvis Ngabo and later by Cheryl Isheja. The word is again reexamined as Motherboard is received by Innocent (Dorcy Rugamba), and then Matalusa (Bertrand Ninteretse).

In time, the very word binary becomes meaningless, a limitation. Frequent mention of binary crime theory, a concept deepened by the line “to imagine hell is privilege,” offers stark reminder that this is a Rwandan film.

For Neptune Frost, there is not one or the other, not past or future, not good or evil, not male or female, not miner or mine. This fluidity makes the film tough to properly summarize, and the ambiguous and ambitious plot structure becomes frustrating during the middle section. But Neptune Frost is never less than fascinating.

Rich with symbolism that brings past to present and reinterprets it for the future, the film speaks of resilience and power. And it does it like no film you’ve seen before.