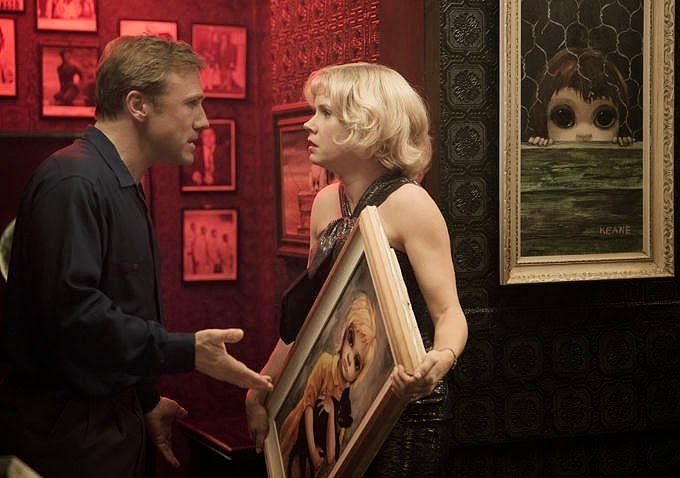 Do people buy art because it touches them, or simply because they are “in the right place at the right time?”

The often combative relationship between art and commerce, and between two people who personified it, lies at the heart of Big Eyes, Tim Burton’s eccentric take on the story of Walter and Margaret Keane.

Walter rose to fame in the 50s and 60s as the artist behind those massively popular portraits of “big-eyed waifs” staring out from behind a frame. He became the Thomas Kincade of his age, savaged by critics but embraced by the masses… and it was all a sham. Margaret was actually the talent, while Walter took the credit and honed his considerable skills in self-promotion. She finally ‘fessed up and claimed her works in 1970, igniting a legal tussle between the former spouses that lasted years.

One look at Keane’s big-eyed characters will tell you Burton is a fan, and the film often benefits from his whimsical vision. Like a mix of Edward Scissorhands and A NIightmare Before Christmas, Burton gives Big Eyes a setting that looks historically familiar, yet slightly other-worldly.

Amy Adams delivers another captivating performance as Mrs. Keane. We feel the conflicting emotions present as Margaret agrees to stay out of the limelight, with Adams creating her own finely crafted portrait of a woman’s quiet struggle against the submissiveness expected of her gender. Margaret is an underdog, and Adams makes it easy to root for her.

It’s a stark contrast to Christoph Waltz’s over-the-top depiction of Mr. Keane. Waltz is a gifted two-time Oscar winner, but Burton and the writing team of Scott Alexander and Larry Karaszewski (Man on the Moon/The People vs. Larry Flynt) don’t give him room to let Walter become anything more than a one-dimensional con artist.

Big Eyes is an entertaining period drama held back by Burton’s broad stroke. The very nature of the Keane’s story begs deeper questions, but they’re ultimately abandoned in favor of those crowd – pleasing happy trees.