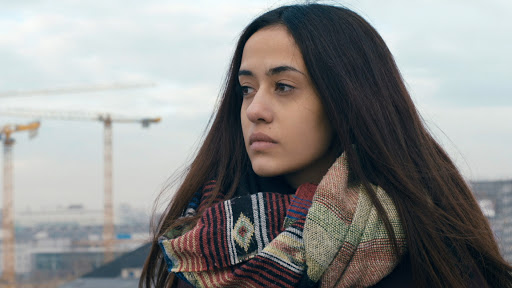 A Step Without Feet

“People want to know about the road, if it was hard getting here. That’s not the question.”

A Step Without Feet, the first documentary from Jeremy Glaholt and Lydia Schamschula, spends 90 minutes in snowy Berlin with a handful of refugees from the Syrian war. The filmmakers’ first question: What do you think of the word “refugee”?

They don’t see the word the same way you do.

It’s actually a fascinating way to get into a story that looks sideways at a topic so often portrayed in documentaries. The bloody, lengthy, horrific war in Syria has launched more documentaries than I can count, many of them brilliant, most of them brutal.

Glaholt and Schamschula pull us out of all that brutality, mercifully, and drop us into the newly created lives of those who’ve escaped it: a dancer and a dentist, a musician and a cook, a writer and a student. Their resilience, nostalgia, trauma and optimism are on screen in a film that recognizes salvation—however profound—as just another transition in life.

Though life in Germany has been seemingly peaceful for the group and each has many happy moments to discuss, the anxieties of the past and the longing for what is lost give their peaceful existence a bittersweet flavor.

Many bridge the past and the present, their old home and new, with art. One writes, one dances, one sings, each of them tapping into something that gives creative outlet to their fear and yearning.

The film’s biggest drawback is its lack of context. We’re 15 minutes or more into the film before anyone utters the word Syria. The reasons each one left is never clearly articulated. While those familiar with the conflict would certainly have a sense, the reasons that these individuals needed to flee while their parents or siblings were OK to stay is never addressed.

With the clear and mostly fulfilled goal of casting these human beings in the present tense, the filmmakers likely made the conscious decision not to dig too deeply in this painful terrain. Still, the magnitude of the subjects’ sorrow, longing and trauma is tied to that specific conflict. To do their present justice we need more of their past.

The film—almost exclusively talking head footage of interviews with the seven refugees—remains strangely captivating throughout. Because of the music, the dance, the poetry and the candor, a deeply human and powerfully universal story emerges.