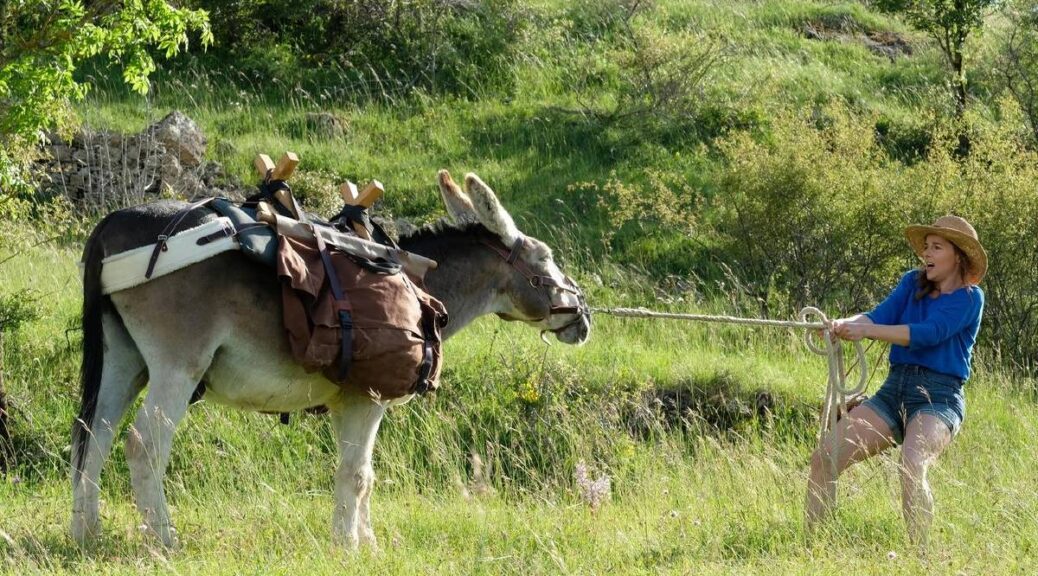 Unabashedly romantic and decidedly French, My Donkey, My Lover & I follows Robert Lewis Stevenson’s journey through Cevennes National Park as walked by Antoinette (Laure Calamy) and Patrick, her donkey.

Antoinette is no hiker, no trail-wizened traveler. She’s a schoolteacher smitten with a student’s father (Benjamin Lavernhe). When he cancels their romantic trip to instead vacation with his wife and daughter, Antoinette decides to crash.

She doesn’t find him immediately. What she does find is that very few people travel with a donkey nowadays, she’s ill-prepared to actually hike 220km with or without a donkey, and that early oversharing with other hikers will make her a bit of a celebrity along the journey.

Writer/director Caroline Vignal keeps it breezy, never vilifying the married Vladimir nor seeing Antoinette as a stalker. A bright, earnest turn from Calamy is hard to resist. She gives Antoinette a good humor that brings a little cheer to even the most embarrassing of situations.

The countryside is gorgeous, the cast of French vacationers and waylayers disarm, and Calamy charms her way through it all. On paper, Antoinette is a fool—a superficial, self-centered fool at that. But Calamy, whose game performance won a Cesar (the French Oscar), keeps the character open and vulnerable.

Still, the star here is Patrick. Vignal has remarkable instincts for animal-related comedy. Yes, we know from the first moment Antoinette can’t get the ass to move where we’re headed. They will reluctantly become best friends, she’ll learn something about independence and things will end well.

But by underplaying the donkey for so long, delaying the reaction shots and obnoxious braying, Vignal manages to swing from charming romantic trifle to slapstick comedy and back with weird grace.

The whole affair feels as slight and ultimately unessential as the one shared by Vladimir and Antoinette. But there’s something forgiving about it that’s appealing. Rather than judge or deny or even truly mock a middle-aged romantic’s starry-eyed quest for love, My Lover, My Donkey & I sees value in it.

Plus there’s a funny donkey.