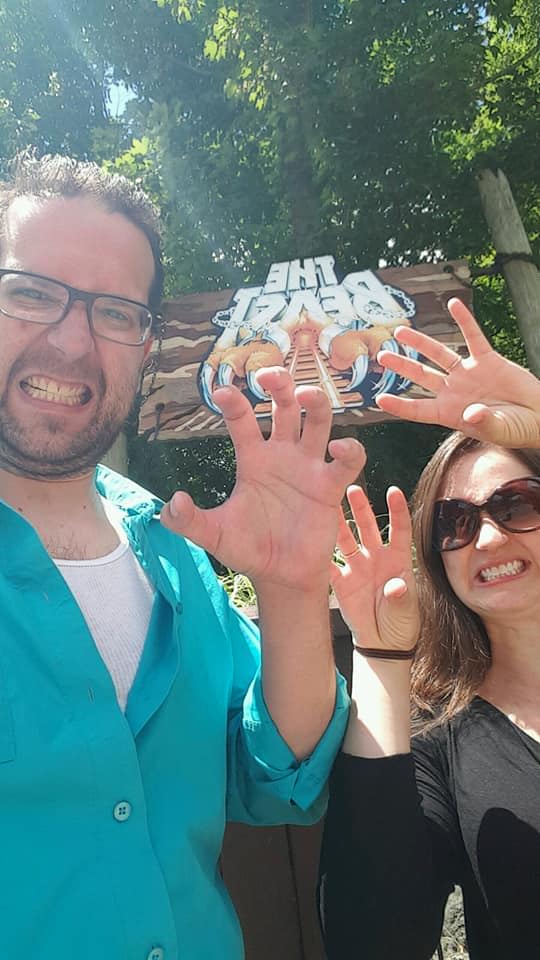 “Christie, why are we doing this?” my companion asked.

I wiggled in my restraints a bit until I could see him in my peripheral vision. “I dunno. What’s that German word that means love-of-death?”

Then we plunged 140 feet down and attempts at conversation were superseded by screaming.

The next day, I woke up, slung my feet over the edge of the bed, toes grazing the floor for a second. I stood and just managed to avoid pitching myself out through the screen of my bedroom window as lightning bolts of pain exploded from my toes, up through my legs, and into my back.

Turns out that wearing heels, even sensible wedge sandal heels, around Kings Island all day is murder on a body that’s knocking on middle age.

As is, potentially, the fast lane pass—which allowed us to conceive a quest: to ride all 12 roller coasters in the front seat in one day.

Much had changed since the first time the companion and I had visited the park over 20 years ago. This time, mom didn’t drop me off and a pager wasn’t clipped to my waistband.

Also, the Hanna Barbera characters I remember have been replaced by the Peanuts gang. The Paramount movie-themed rides (Top Gun, Italian Job, Face/Off) have been rechristened. I can legally drink now. (Hell, my ability to drive can legally drink now.) And, somewhat crushingly, there is a 90s-themed gift shop directly on your right once you step through the turnstile.

But there is also the ability to purchase a wristband that lets you line jump. Legally.

A fiendishly good idea pioneered by Disney, the “fast pass”creates a class system where spendy people can hand over a wad of cash and avoid broiling in the sun. The park gets more money and you get an opportunity to spend former line time sitting in the shade, drinking ten-dollar beers and avoiding making accidental and awkward eye contact with the teenagers groping each other in line.

Which is good, because my companion for the day was my first-ever boyfriend, with whom I once spent time in line engaging in more PDA than I can remember without going red in the face.

We started with the Vortex, the new coaster when we first got enough height on us to ride the real rides. Then the Racer, which instead of racing a backward car against a frontward car, now races a fast lane car against a regular lane car (both facing forward) and makes the economic divide a little too apparent.

At this point, my companion regressed and proceeded to taunt the teenagers riding in the second-class train.

They won. They wanted it more.

And around the park we went, pointing out the absence of beloved old attractions (RIP Screaming Eagles), lamenting the loss of the former movie soundtrack playlist, and psyching each other up for the newer, scarier rides. Mystic Timbers (16 hills and an ambitious shed experience), Diamondback (215-foot drop, flying over hills at 80 miles an hour) and Firehawk.

Firehawk required more ten-dollar beer. This thing starts you off on your back and drags you up the hill facing the clouds, before—at the apex—turning you over so all your weight is on the harness and you fly around on your belly like Superman.

This thing made me tense all my muscles in an attempt to burrow physically into the seat behind me.

“Trust the harness!” my companion screamed at me over the wind.

And I let go, soaring through the air. Maybe I’m wasn’t outstretched in languorous flight. My arms might have twisted into a shape more reminiscent of an anxious t-rex then the man of steel, but it was fun.

By the time we hit the last ride of the day, the tragically renamed Invertigo, we’d been at Kings Island for longer than the average workday. Feet were screaming. Brains had been repeatedly banged against the hard cases of our skulls. The ten-dollar beers had shaken up in my guts to the point where I was continually nauseous. We’d stopped talking and leaned against the metal bars of the first seat line, vacantly staring at the teenagers playing grab ass.

Still, when I wordlessly did the face waterfall from Face/Off at my companion, he smiled.

After the closing fireworks, mission complete, all roller coasters bested, I drove back up 71 to Columbus to my husband and daughter—a road on which every single skunk seemed to have committed suicide by car, where they were refreshing the blacktop in stretches with something that smelled suspiciously like pee, and where the sewage treatment plant on the south side was very much actively working. I sipped water, trying not to vomit, and eyed the dinner plate-sized-and- growing bruise on my right thigh under the intermittent flash of the streetlamps.

Totally worth it though, to hang out with someone whose early memories are much the same as yours. To point out the absence of something and have them fill in what was there. To have a shorthand conversation with a gesture. Feels like flying.

If we do this again, though, I’ll pre-game with a preemptive strike of Advil.

And prioritize getting matching airbrushed T-shirts.