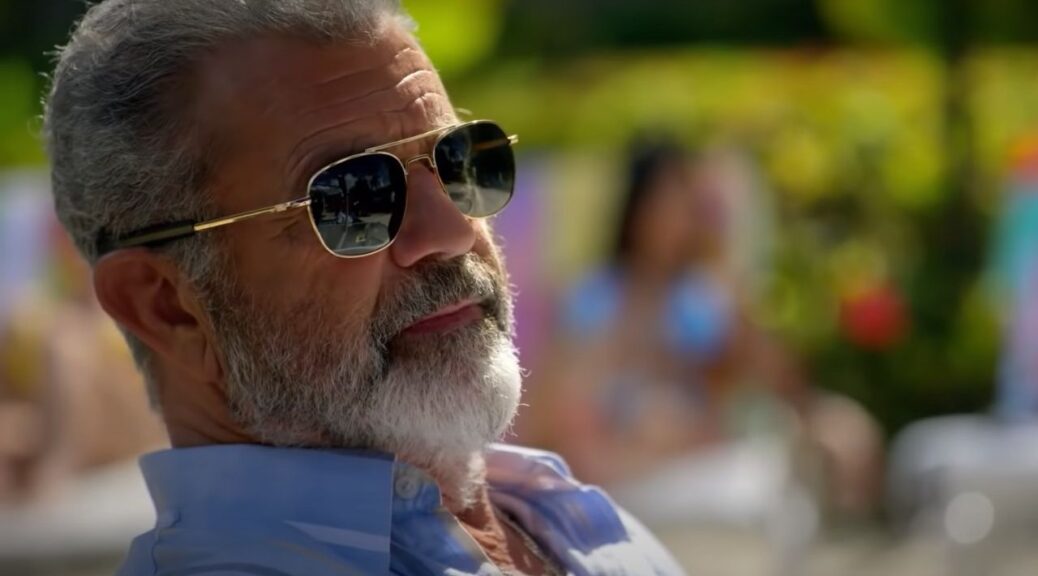 There’s been a lot of talk lately about the “Geezer Teaser” subgenre. What’s a Geezer Teaser you might ask? Well, it’s typically a cheaply made action movie or thriller that has a semi-recognizable young lead (usually Scott Eastwood or Devon Sawa), and a much more famous older actor that shows up for a solid 10 to 15 minutes tops. A lot of action movie heavy-hitters have done these. Bruce Willis, Sylvester Stallone, John Travola, and Mel Gibson have all done their fair share.

I guess the big question is “Are these movies any good?”

No, not really, and Panama, Gibson’s latest in this subgenre, is particularly sleep-inducing.

Ex-marine James Becker (Cole Hauser of 2 Fast 2 Furious) is recruited by Stark (Mel Gibson) to negotiate an arms deal in the country of Panama. As the American invasion of Panama looms over the country, Becker becomes more embroiled with the corrupt government and a shadowy local (Kiara Liz).

From the get-go, Panama is a chore to sit through. Director Mark Neveldine (Game Over, Ghost Rider: Spirit of Vengeance) tries hard to craft a sexy, tropics-based thriller, but nearly every beat is a re-heated moment from infinitely better movies. It’s not a matter of budget, as Daniel Adams’s and William Barber’s script fails on even an entertainment level. The twists lack surprise and a coherent story or character motivation seems to have been an afterthought.

That Panama is so inert is a shame as Neveldine and former directing partner Brian Taylor made two of the wildest action movies with their Crank series. Panama – while not trying to be anything that zany – lacks even a tenth of Crank’s macabre sense of humor or electric visual style.

Cast wise, the bulk of the heavy lifting is put on the shoulders of Hauser. Hauser has rarely been a leading man, and his work in Panama does nothing to show that this should change. Supporting turns in Dazed & Confused, Good Will Hunting and Pitch Black allowed the actor to play second, third or even eighth banana in some really good films. For a character that’s supposed to be charismatic and suave, Hauser brings nothing to the role. His constant stoic and dry delivery conveys the opposite every single time.

At this point, Gibson is just doing his traditional thing. He shows up, kicks a little ass, delivers a few cool lines and heads off into the sunset. It’s the kind of role Gibson could do in his sleep, but doesn’t offer anything we will remember even five minutes after the credits begin to roll.
As far as Geezer Teasers go, Panama is hardly the worst. Still, with weak action, a “been there, done that” story, and a phoned-in cast, it’s still one to skip.