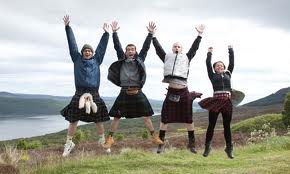 How does a young Scottish thug turn his life around to become the father his infant son needs? He relies on national resources: a kilt, some good Scotch, and the music of the Proclaimers. Done.

The Angels’ Share follows Robbie (Paul Brannigan), a wayward youth facing charges of beating and disfiguring several other young Scots. The judge chooses leniency because of the positive influence of Robbie’s girlfriend and his impending fatherhood, so he’s facing community service rather than prison time. Too bad the judge’s good nature won’t help him with his girlfriend’s dad or those same disfigured toughs.

Working again with longtime collaborator, screenwriter Paul Laverty, filmmaker Ken Loach’s eye for social commentary twinkles a bit. Like many of the duo’s films, The Angels’ Share situates us within the generations-deep custom of poverty and criminality in the UK’s lower classes. Loach’s trademark spontaneous realism is on display, but this film offers more cheek and charm, possibly less social relevance than his more famous works.

Loach’s efforts are aided by generous, naturalistic performances from a cast heavy with newcomers. (How novice and natural? Expect accents so thick you’ll be grateful for the subtitles.) But it’s veteran character actor John Henshaw who provides the spark that turns the film from grim street crime tragedy to buoyant tale of resilience. His role could easily have fallen into the realm of cliché, but the seasoned performer keeps the characterization honest. Anything else would have felt wildly out of place.

In his film debut, Paul Brannigan anchors the adventure with an understated turn that realizes the burden of self loathing and the fire of a man’s determination to change his destiny. His performance is tender and charming, not to mention terribly impressive for a novice.

He’s flanked on all sides by fresh and endearing comic foils. The supporting characters are edgy enough to broaden the image of not-quite-working-class Scotland, but Loach, Laverty and a talented supporting cast give each an individual struggle and a clear personality.

What the film lacks, finally, in social relevance it makes up for with unexpectedly joyous adventure.