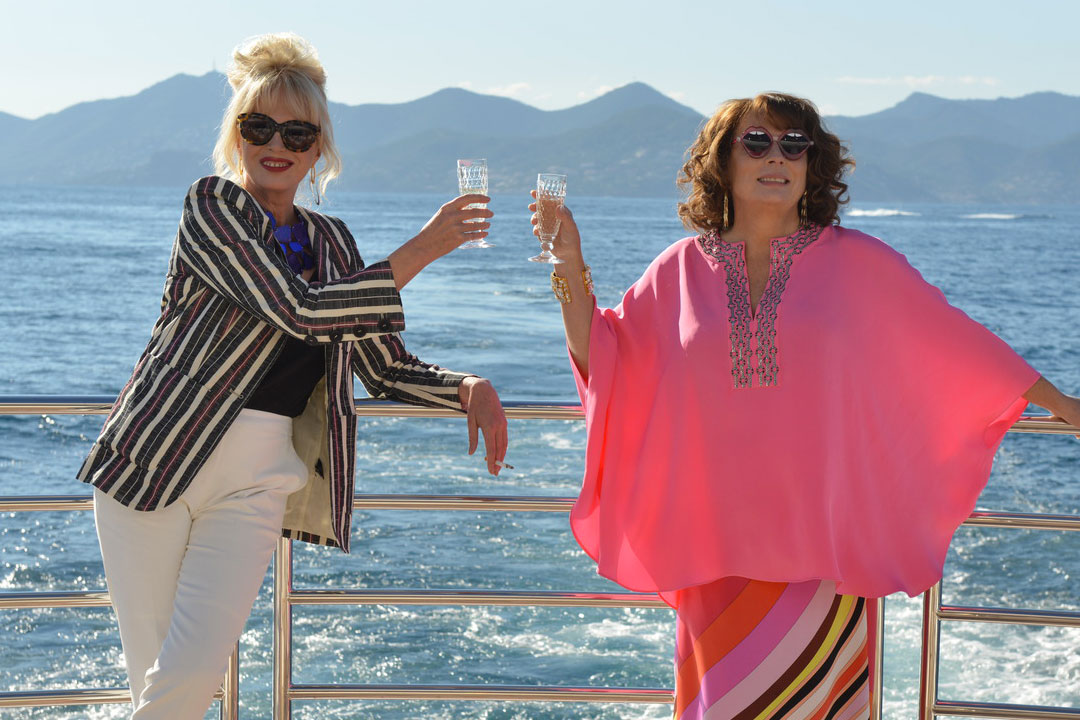 There is something cathartic in watching the brazenly wrong-headed Eddie Monsoon (Jennifer Saunders) and her enabling bestie Patsy Stone (Joanna Lumley) of Absolutely Fabulous make bad decisions. This summer, they take their Bollinger, ciggies, Botox and bags of coke to the big screen. The result is Moderately Fabulous.

The British sitcom has enjoyed sporadic but popular runs on BBC since the early Nineties. Saunders – who also writes – pokes fun at celebrity culture while she and Lumley offer a master course in physical comedy, onscreen chemistry and unseemly humor.

Will the boozy duo’s quest for the swingin’ celebrity life ease as they sashay into their sixties? Of course not.

Eddie’s PR firm has fallen on hard times. Her champagne fridge is empty and her credit cards are “broken.” What she needs is one big client. Good luck! Kate Moss is between PR agents. If Eddie and Patsy can finagle a meeting at the upcoming fashion show without knocking Moss into the Thames and drowning her, setting off a social media frenzy, not to mention an all-out police manhunt, they’ll be back in the Bolly in no time.

Though the plot is almost painfully thin, padded with a veritable cameo-gasm (the highlight of which is a hilarious Jon Hamm), Saunders keeps the raucous one-liners flowing. And their wisdom is, as usual, spot on.

Tough night of boozing and pill popping? Freshen up with a little spritz of after birth.

And the best advice yet: “Avoid the Jacuzzi – it’s a smoothy of old sperm.”

Yes, these are still the most delightfully horrible people in the world, and Ab Fab is at its best when it remembers this. Their generational issues are not meant to be resolved lovingly, wistful moments of regret are antithetical to their credo, and God knows no lesson should ever be learned.

Unfortunately, Saunders does not abide by these laws entirely. Director Mandie Fletcher can’t hide the threadbare script behind a runway’s worth of cameos, either. Like so many cinematic sit-com adaptations, Absolutely Fabulous would have played better on the telly. But thanks to Saunders and, in particular, the comedic genius of Lumley, you will laugh.