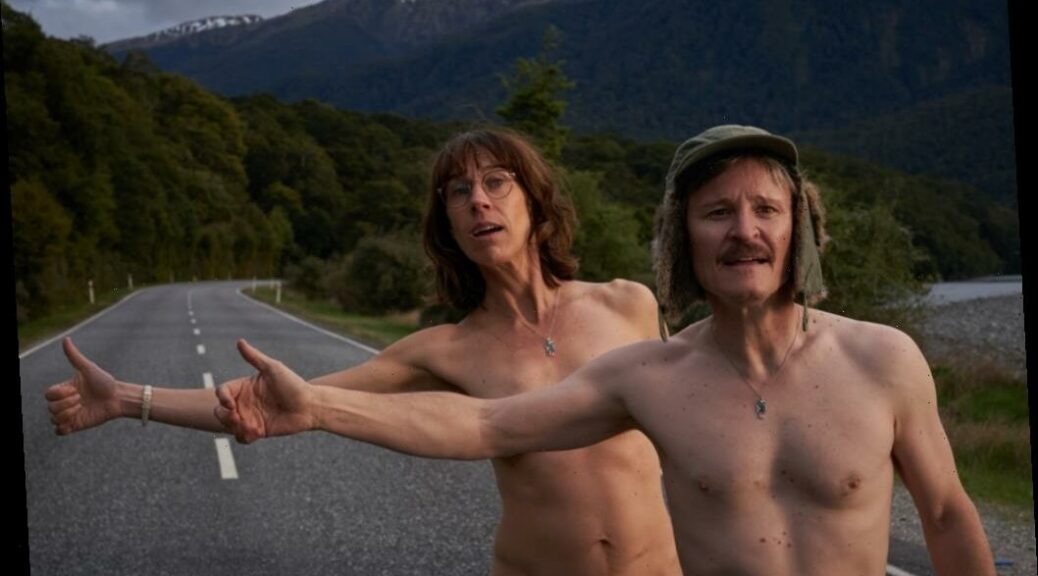 “It’s rude not to be nude on Nude Tuesday.”

It’s with this kind of casually dropped line and its sincere acceptance that co-writer/director Armagan Ballantyne laughingly challenges status quo and self-help in equal measure.

It’s nothing if not an odd film.

Ballantyne writes with star Jackie van Beek (What We Do in the Shadows) and Ronny Chieng. Ballantyne and van Beek composed the script, which is written entirely in a very Nordic-sounding gibberish language. Chieng wrote the subtitles.

This makes you wonder, was the English language version available to the actors, or did Chieng figure out what they were saying later? And why?

Either way, the actors convince. You’ll immediately forget that this is not a real language (which means you’ll cease to marvel at its delivery, and that’s a crime).

Van Beek is Laura, whose marriage to Bruno (Damon Herriman) has been unsatisfying for a while. His mum has noticed, so she bought them a trip to a retreat run by the charismatic Bjorg (Jemaine Clement).

The duo will try new things, learn about themselves, slowly unveil the buried troubles in their relationship, and work toward that day of days: Nude Tuesday.

Before we get there, though, Ballantyne runs through an absurd comedy of manners. Van Beek’s awkward, do-what’s-expected delivery is perfect, and Herriman’s over-eager approach creates a funny balance.

Clement’s simpleton narcissism delivers the most consistent laughter in a film that’s cleverly delightful if not bust-a-gut funny.

The cast wields the language impressively. Still, the creative decision is a head-scratcher. The fictional language doesn’t impede enjoyment of the film, but it doesn’t heighten it, either. Because of the subtitles, it doesn’t do anything at all. Would we be able to follow along without captions? And if not, why put the cast through learning the false dialog and the audience through reading the real deal?

It’s a conundrum, but not one worth a lot of energy. Nude Tuesday delivers a charming coming-of-middle-age comedy (and a lot more nudity than you probably need).