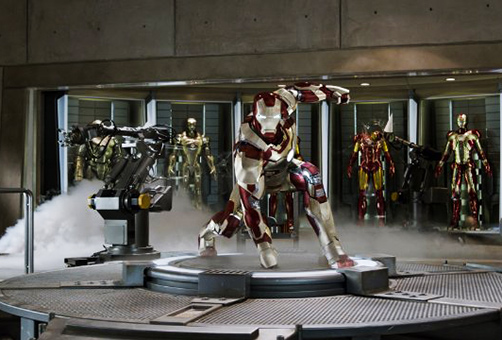 With an infusion of hip from a slick new filmmaker and the continued excellence of its star, Iron Man 3 re-establishes the high-tech suited one as the anchor of The Avengers franchise.

Of course, Robert Downey, Jr. can go a long way toward making even weak films entertaining, but even he seems to have more pep in his step this time thanks to director/co-writer Shane Black.

Black, given the keys to this valuable engine from executive producer Jon Favreau, does not disappoint, filling IM3 with snappy dialogue, clever plot twists and intelligent subtexts addressing self-doubt and terrorism. Oh yeah, and plenty of the impressive 3D visual wizardry that’s required of a superhero blockbuster.

The story catches up with Stark enjoying his fame as usual, but also suffering bouts of insomnia and anxiety while trying to come down from the Avengers battle royale.  He stays up all night crafting more toys for his alter ego, only to be plagued by nightmares when he does manage some sleep.

It doesn’t help when an old acquaintance (Guy Pearce) shows up with a business offer and an eye for Stark’s love Pepper (Gwyneth Paltrow), or when one of Stark’s old conquests (Rebecca Hall) joins the soap opera with some mysterious warnings of her own.

And then, as if Stark didn’t have enough on his mind, international terrorist “the Mandarin” (Ben Kingsley) starts blowing everything up!

Black and Downey Jr., re-teaming after the underrated Kiss Kiss Bang Bang from 2005, know that the best comic book- inspired stories turn darker as they age, and they both show good instincts toward how to best apply that formula to their story. They break Stark/Iron Man down mentally, physically and mechanically, while managing to keep the film smart, funny, and often spectacular.

There’s plenty to keep you engaged, and keep you guessing, with the impressive cast of actors providing downright gleeful performances.

Ironically, IM3’s biggest weakness comes from sometimes having too much of a good thing. With Patriot (Don Cheadle) by Stark’s side in the explosive finale, there might be one too many suits, near deaths and breathless escapes.

That’s nit-picking I know, and not enough to derail Iron Man 3 as a thrilling start to the blockbuster season.