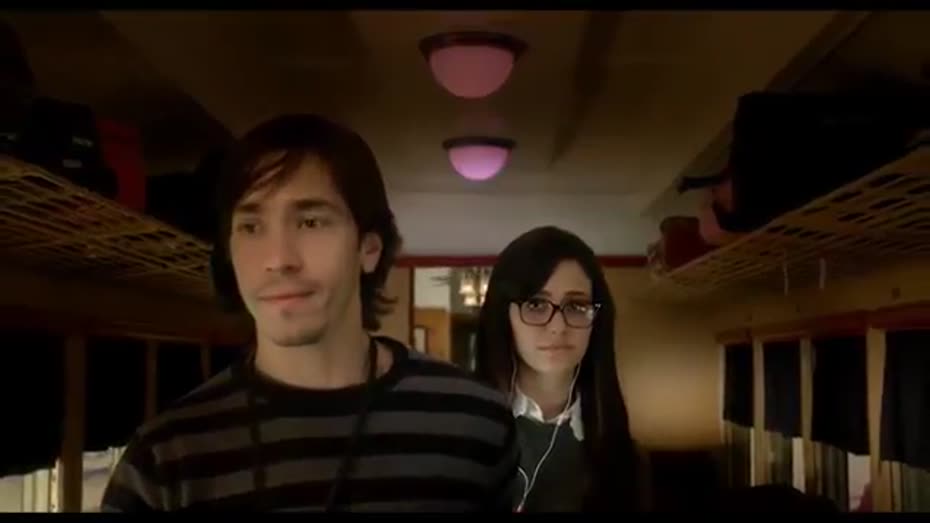 The extent to which you will enjoy Comet will probably depend on whether you are the type of person who thinks the Police’s “Every Breath You Take” is a good song to play at a wedding or not.

Comet has a similar feel.

Neurotic Dell (Justin Long, who you might remember as the Mac guy from the commercials),relentlessly pursues Kimberly (Emmy Rossum) over a six year period during which he physically runs her down, declares his probable love for her on their first date, waylays her on a train, and shows up on her doorstep before her wedding.

Long and Rossum deliver stellar performances managing to effortlessly handle repartee of nearly Gilmore Girls proportions. Their chemistry is undeniable. However, it may be my inner cynic talking, but I found myself wanting to shake Kimberly by her slender little shoulders and point out all the red flags she seems unable to see.

Comet is a far more intellectual movie romance than is typical. It takes place in a parallel universe, which allows writer/director Sam Esmail to include some beautiful and trippy imagery. He also presents the story out of sequence, skipping around in the timeline of Dell and Kimberly’s relationship from a meeting during a meteor shower, to a snowy day in Paris, to a heart-to-heart on an LA rooftop at dusk (or is it sunrise?). Comet leaves the interpretation of what actually happens to the couple up to your careful scrutiny and interpretation.

Maybe not the movie to see on a first date, it nevertheless provides excellent fodder for discussion and perhaps a follow up movie marathon featuring 500 Days of Summer and Eternal Sunshine of the Spotless Mind.

As we head into the holiday season, do you worry that your family and friends are just too delightful? Do you long for awkward stories to share with co-workers in the break room about the rude kids with eyes glued to their smart phones, cousin Stan’s narcissistic monologues about how much money he makes, and repressed childhood rage erupting over Pillsbury Crescent Rolls?

If so, Listen Up Philip might fill the void.

Dive into the life of notable author Philip Lewis Friedman (Jason Schwartzman) as he prepares to usher his second novel into publication. He’s got everything he wants: a New York apartment, a successful photographer girlfriend (Elizabeth Moss), and placement in a top 35 under 35 list.

But he is incapable of experiencing happiness, crippled with anxiety and dread.

When established-author Ike Zimmerman (Jonathan Pryce) offers him craft advice and a place to crash, Philip flees upstate to the country.  With misanthropic Zimmerman as a model, Philip fully begins to explore the dark and musty corners of his asshattery. And this after he has made two separate social engagements to berate an unsupportive ex and his less successful college roommate (“This could have been us! Instead, I’m all alone.”) and thrown a tantrum, refusing to promote his novel.

Instead writer/director Alex Ross Perry, treats us to character studies of entitled, white males who operate like emotional vampires, sucking their intimate relationships (and the women recovering from them) dry to fuel their work. Don’t expect any reformed curmudgeons in this one.

Listen Up Philip is faultlessly acted and often darkly funny, tickling a malignant funny bone when Ike and Philip brazen past the social niceties. (At one point, when a student in his creative writing class asks Philip for a recommendation, he scolds her while shuffling around on his desk, then shoves a blank piece of paper at her, saying, “Here’s a piece of paper with staples in it.”)

You may recognize this kind of guy from your humanities classes. Maybe you had the misfortune to have one sidle up to you at a party. Or perhaps one is waiting for you to pass him the turkey.