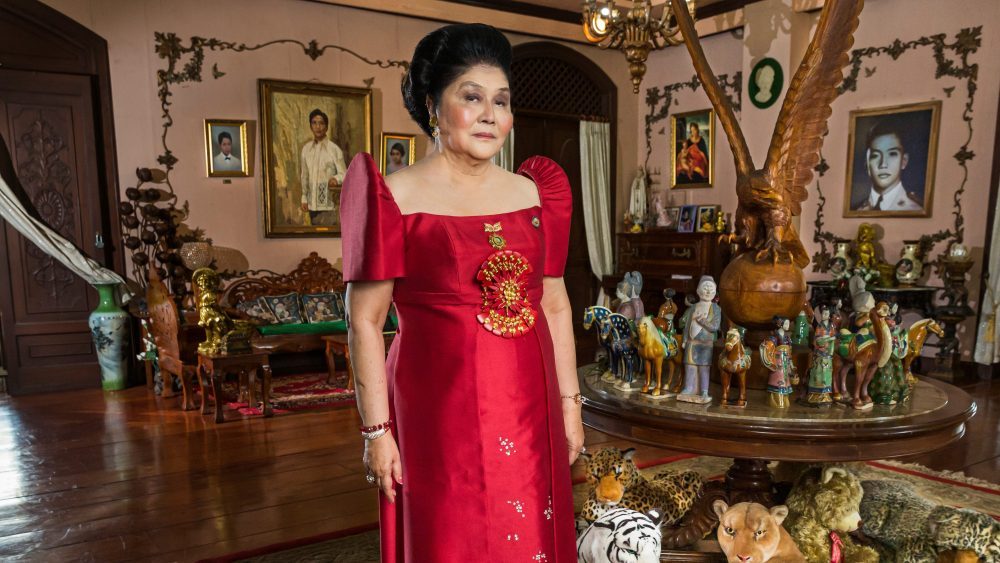 Is there anything more dangerous than a sense of entitlement? This belief in being owed something unearned—a theme that’s played in a number of filmmaker Lauren Greenfield’s documentaries about the absurdly wealthy—takes on a more sinister stench in her latest, The Kingmaker.

With surprising access and intimacy, Greenfield delivers a behind-the-scenes look at the Marcos family’s return to power in the Philippines. It’s a dark, almost surreal image of what passes for reality in this post-truth world and it is depressing A.F.

We spend most of our time with Imelda Marcos, best known for being the first lady of the Philippines during Ferdinand Marcos’s dictatorship, and for owning thousands of pairs of shoes.

“Martial law, that was the best years of Marcos because that’s the time he was able to give the Philippines sovereignty, freedom, justice, human rights,” Imelda wistfully remembers of the period during which 14 of 15 newspapers closed, 70,000 people were incarcerated—half of them tortured—and 3200 people were killed.

But according to Imelda, “There are so many things in the past that we should forget. In fact, it’s no longer there.”

These days, Marcos devotes herself to supporting her son Ferdinand “Bongbong” Marcos’s political aspirations. As Greenfield follows along on Bongbong’s vice presidential campaign, she frequently pauses to reiterate some salient points from the last time a Marcos ran that country.

Two journalists and a teacher share their stories of torture, including rape, under the regime. In an almost surreal yet bracingly telling piece of filmmaking, Greenfield also spends time with the islanders most effected by Imelda’s fondness for exotic animals.

Marcos reframes her capacity to loot her nation to serve her own pathological spending habits as mothering, love. Indulgence is love. Grotesque, criminal self-indulgence at the expense of her nation’s citizens? Well, she claims that never happened, but if that Monet painting that she definitely did not purchase with ill-gotten money has been found, can she get it back?

The corruption hangs from this family like a mink stole, and The Kingmaker doesn’t deliver the same empathetic shock value to be found in Greenfield’s 2012 doc The Queen of Versailles. Instead, we watch as a nation forgets its horrifying history and, swept up in the “everybody loves a bully” philosophy that seems to have overtaken the entire world, sits complicit as a family of criminals and looters takes its seat again at the head of the nation’s table.