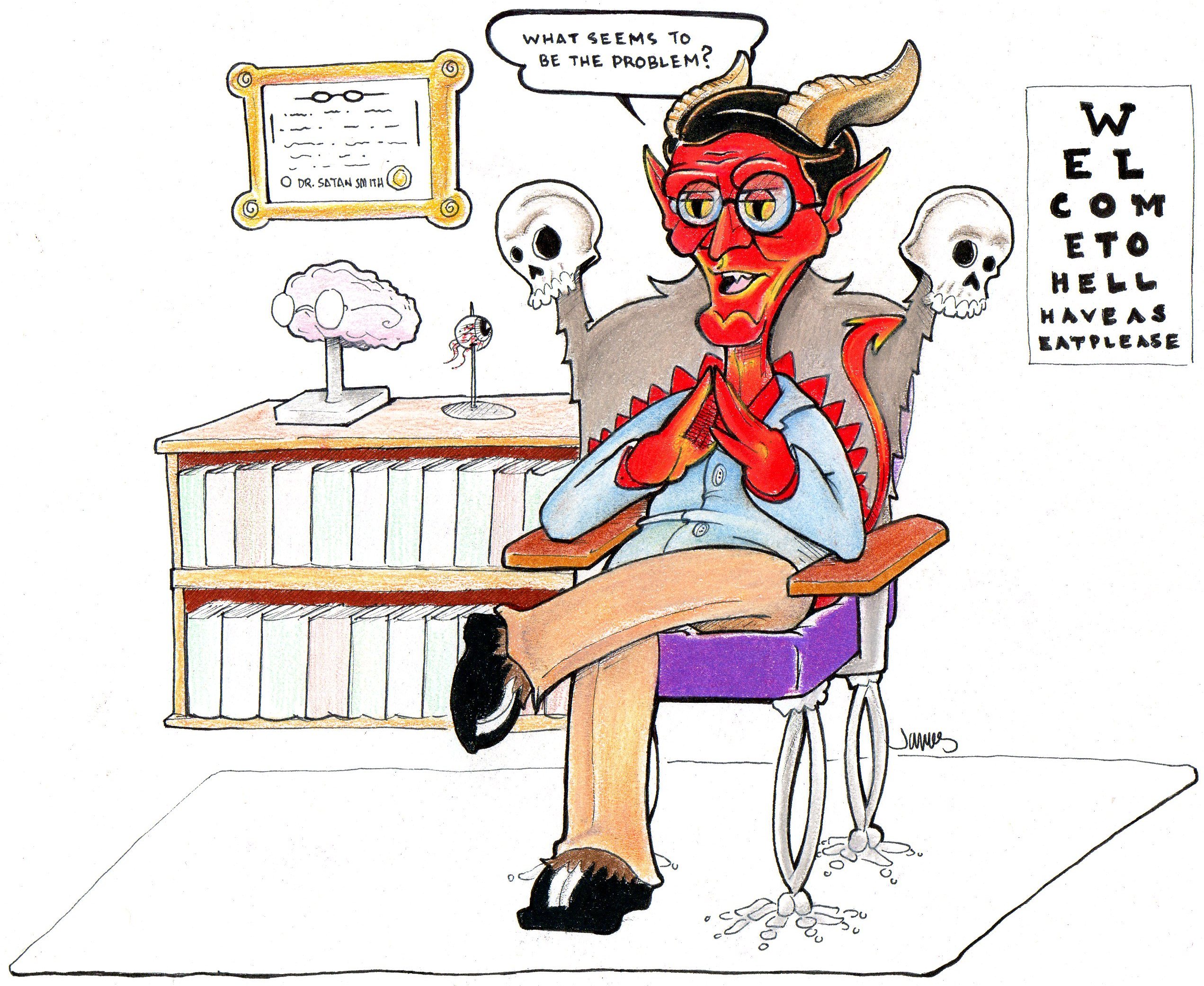 When my son was about 8, our eye doctor retired and we inherited a newer, better version. The new eye doctor was explaining some of the specifics of Riley’s condition to him, and mentioned that he had astigmatism. To which Riley naturally replied, “And how is that related to stigmata?”

Perplexed and maybe a little frightened, our ophthalmologist looked to me.

I explained to the boy:

Why was my 8-year-old already familiar with the term stigmata – the spontaneous appearance of wounds corresponding to the wounds of the crucifixion? Well, why isn’t yours?

I myself was trained in the gorier aspects of the Catholic faith when I was very young, so why not my boy? Though I doubt I could provide the appropriate tutelage on the darker edges of Catholicism that I’d received from Sister Cleofa.

Sister Cleofa was my first grade teacher. Back in those days, twins were separated in school to encourage individual development, so my sister Joy was across the hall in Sr. Angela’s class.

Ah, Sr. Angela’s – the envy of all Sr. Cleofa’s pupils. Sr. Angela was youngish. She wore the more lightweight habit, sometimes in a jaunty pale blue. She played acoustic guitar. She smiled routinely.

Sister Cleofa, she was not.

No, my teacher wore the full black garb, boasted heavy facial hair, and never smiled once. (I promise you I could not vouch for the fact that she had teeth at all, though I would predict fangs.)

And while the 6-year-olds across the hall drew pictures of angels and learned folk gospel tunes, we studied the Stations of the Cross.

If you’re unfamiliar, these are the pivotal steps of Christ’s condemnation, death, and – if you’re brave enough to make it through the tale of innocent blood and carnage without sobbing so loudly you drown out that final station – resurrection.

My mustachioed teacher terrified us all. Catholicism had been utterly run of the mill for me up until then: my dad worked for the Catholic church and my mother was deeply devoted in an unadorned, tight lipped way. We gave up meat during lent. We genuflected as we entered pews. We made the sign of the cross with holy water. We never missed Mass.

Even when we went on vacation, my dad may not have been able to find a public restroom, but by God he’d find a Catholic church.

But Sr. Cleofa’s obstinate devotion to the darkest, ugliest, most purple robed and mysterious elements of the religion began to fester in my young mind. And though Satan was never studied outright, he always seemed present in her teaching, hiding just beyond all that blood, misery and fear. Maybe that’s why the great devil worship scare of ’88 felt so natural, obvious even.

What great devil worship scare of ’88, you ask?

You probably didn’t know what stigmata meant, either.

Let me introduce you to my hometown sheriff, Dale Griffis. In the Eighties, Griffis was considered an expert in Satanism. I swear this is true. Look it up.

He claimed that the rural counties of Ohio were home to dozens of covens, and that ritualistic human sacrifice was commonplace out among our heartland corn rows.

A lot of people think the Necronomicon is a pretend anti-bible used in movies like Evil Dead, but Griffis claimed to own a copy.

He witnessed on all the talk shows – Geraldo, in particular. He even appeared on 20/20 at least once. Naturally, this suggested to us in Tiffin that our hometown and its outlying agriculture was the hotbed of Satan.

And there was proof!

Rossford, Ohio’s telephone exchange is 666 – I swear to God!

The streets in the town of Gallipolis take the form of sixes, and townsfolk chase outlanders to the town center for sacrifice. (This is unverified, but so obvious if you know anyone from Gallipolis, which you probably do not.)

Plus, our town founder was killed as he camped in what would one day be called Hedges Boyer Park. He was skinned alive, his bones all that was left of him, because he’d disturbed a coven.

(Note: This may not be true. My brother-in-law Brett told this story to my sister and me at bedtime one night. This makes him a likely liar, and an undeniably poor babysitter.)

OK, maybe we were looking for evidence where none existed, but we were only following Griffis’s lead.

His tales of rural demons were eventually uncovered as an overripe paranoid frenzy. For a truly horrific example of the damage done, though, Griffis was the prosecution’s “expert on the occult” in the trial of the West Memphis Three – you remember, those teenage boys wrongly convicted of child murder?

The court ruled they were Satanists, based largely on expert witness testimony, but would later find that they’d been wrongfully imprisoned for 18+ years based on superstition, ignorance and poor police work.

Between Griffis’s stories and Cleofa’s grim teachings, I’m lucky all I have to show for their influence is a keen interest in horror films and a son with unusual questions about vocabulary.

I’m lucky I didn’t end up with repressed memory syndrome or some other lasting stigma.

Now, how again is that related to stigmata?

Thanks to James Garze for the kick ass illustration!