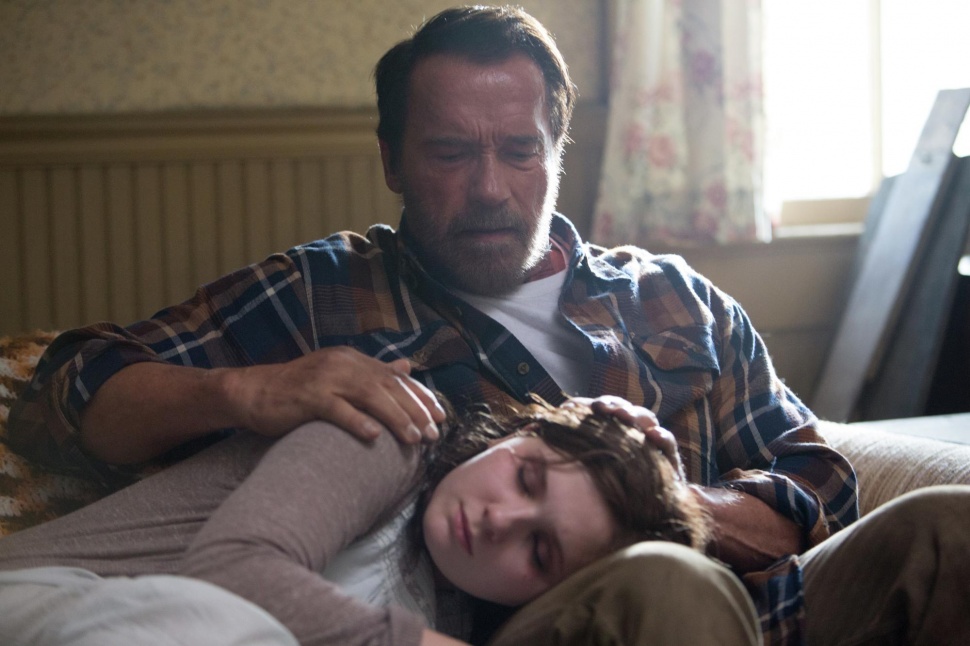 Arnold Schwarzenegger stars in the zombie flick Maggie, but Conan the Zombarian it is not.

Forget the set pieces, explosions, pacing and quips generally associated with the big Austrian. Here he plays an anxious Midwestern father in a time shortly after the zombipocalypse. His teenage daughter (Abigail Breslin) is a member of the infected and he is more interested in protecting her from the outside world than in protecting the outside world from her.

Director Henry Hobson’s feature debut upends expectations no matter what they may be. By blending genres and placing stars in very different situations than their norm he’s opened the audience up to accepting some odd turns. The film itself does not always deliver on this intriguing promise, but despite the slow pace and quiet tones, it keeps your attention because you can never be sure what will happen next.

Breslin, already the star of one of the best zombie comedies of all time (Zombieland), proves a nuanced performer with this pensive turn as a teen awaiting the inevitable. Schwarzenegger has never offered as dialed-down and somber a performance, and while the film is absolutely Breslin’s show, his support is tender and unexpected.

Maggie is a character study, and a gamey twist on the coming of age film as father and daughter wait – not for that impending dawning of womanhood, but for her imminent death, and what comes after. Hobson and screenwriter John Scott 3 are not in it for exploitation. Although the film inevitably gives over to sentimentality, the filmmakers’ restraint throughout allow the proceedings a little dignity.

The film may have a tough time finding a niche. Schwarzenegger’s fans may hope for something a little flashier while genre fans may be left unsatisfied. But Maggie has something to offer. It’s a small film that explores something relatable and intimate, even if it chooses an unusual setting to do it.