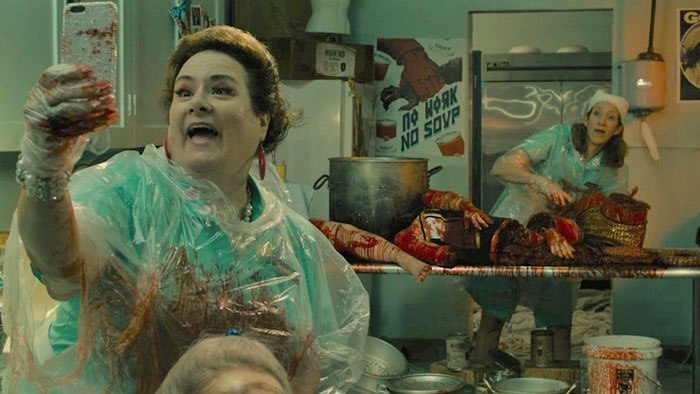 Short films rarely get their due, and getting an audience is rarer still. Any opportunity to sit down with a set of shorts that made a splash in the festival circuit is an opportunity worth taking. If arterial spray and laughter are your thing, Hellarious is a chance worth taking.

The compilation contains seven short films, each a horror comedy. There’s no framing device or theme, simply a collection of sometimes bawdy, once in a long while sweet, mostly viscous horror. There are a lot of fluids here.

Director Jason Tostevin, who also compiled the films, helms two of the shorts in the program, both co-written with Randall Greenland. ‘Til Death offers a post-mortem comeuppance tale boasting several strong performances. Born Again, though, is one of the compilation’s two highest points.

Six and a half minutes with the worst Satanists ever exposes you to a really beautifully filmed subversion of expectations. Slyly comical performances top to bottom entertain, but Greenland is a laugh riot in a starring role.

The collection’s second high peak comes thanks to Clarissa Jacobson and J.M. Logan’s sloppy concoction, Lunch Ladies. This is a delirious fantasy about underdogs rising to the challenge and making their dreams come true—becoming personal chefs to “the Depper,” Johnny Depp. Donna Pieroni and Mary Manofsky deliver consistent laughs in a film that almost makes a person want to love Johnny Depp again.