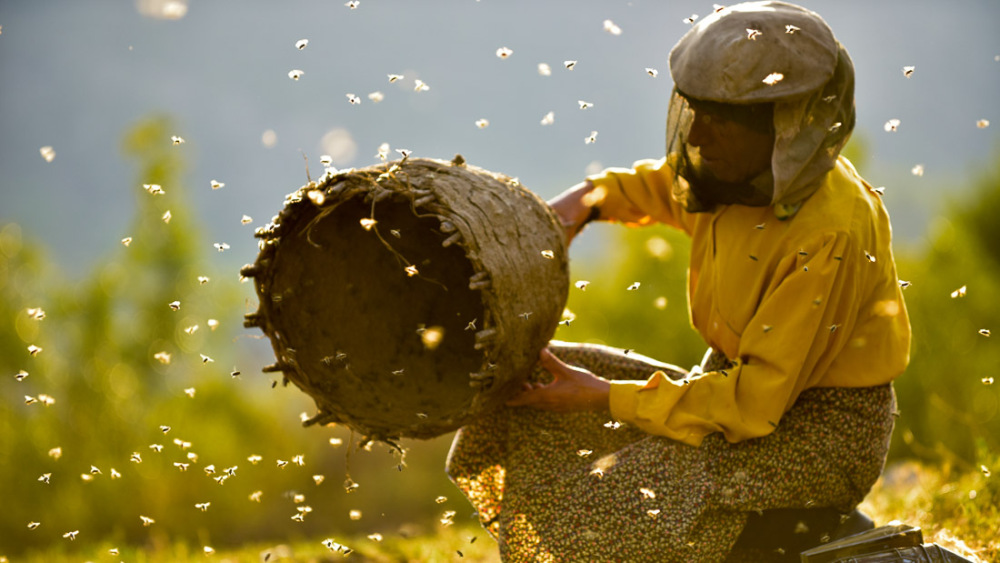 Cinematic in structure, narrative in its storytelling, all of it expressed with a visual flair that give it the sense of poetry—Honeyland is no ordinary documentary.

Filmmakers Tamara Kotevska and Ljubomir Stefanov offer a master class in fly-on-the-wall documenting with their patient, beautiful story of a lone beekeeper. Or is Honeyland actually an analogy for the human race and our relationship with this planet?

The Sundance winner offers no exposition, no context, no question and answer. Content to simply observe, Honeyland follows Hatidze Muratova, a Macedonian beekeeper. Loving long shots establish both the rugged terrain and the isolation of Hatidze’s days as she begins the yearly cycle of transporting a hive, caring for it and reaping the benefits of that patient, diligent work.

The filmmakers’ respect for Hatidze drives the doc, which never labels or trivializes its subject, never patronizes.

The solitude and the quiet of Hatidze’s days spent with bees and evenings with her bedridden mother soon make way for chaos and cacophony, as Hatidze’s lonesome dot of Macedonian land makes room for Hussein Sam and his nomadic family.

Kotevska and Ljubomir abandon the long shot in favor of mid-range filming and close ups crowded with jumping children, bickering siblings, chickens and cattle. The campers, the kids, the lifestock, the noise—all of it caught with affection and trepidation by both the filmmakers’ camera and Hatidze’s smiling eye.

Somewhere on the edge of this rush of sound creeps Hatidze, curious and cautious but smiling. Little by little she and this family form a community. She even becomes something of a mentor in the beekeeping tradition to one of the young sons, forming a sweet and eventually heartbreaking relationship.

Heartbreaking because rush and need, ambition and impatience all combine with selfish interests to convince the Sam family that beekeeping is also for them. Shortcuts lead to a natural imbalance and soon Hatidze faces the crisis left behind when the natural environment is used for profit rather than nurtured for balance.

Beautifully filmed with natural light to create a sort of visual lyricism, Honeyland becomes an allegory for our times. It’s hard not to be invested in Hatidze’s story, in her bees, as if our own future depends on them.