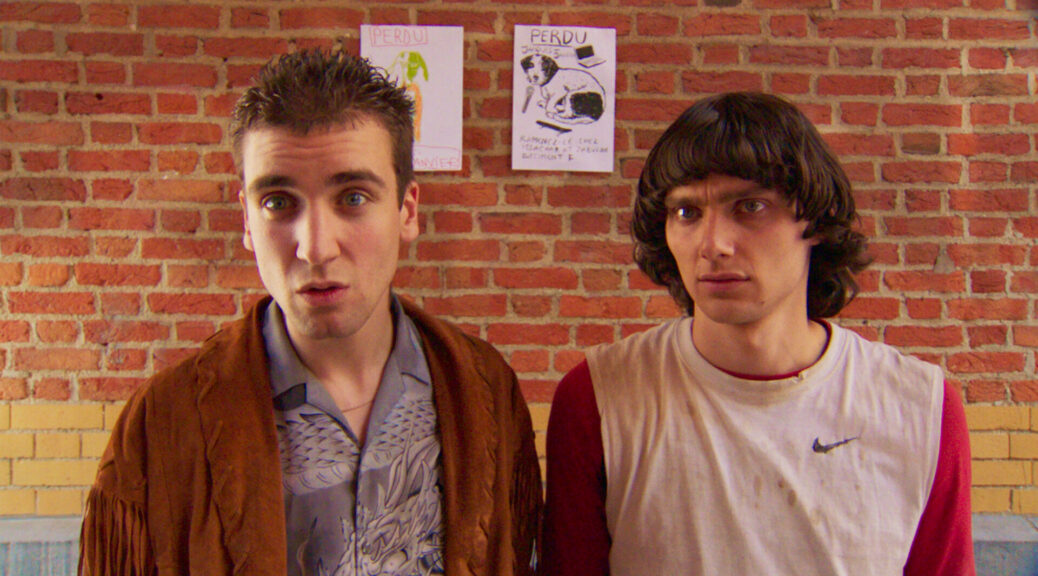 My relationship with gross-out humor is hit-or-miss. Like millions of other people around the world, I laughed uproariously as Cameron Diaz used the wrong “hair gel” in There’s Something About Mary. For 20 years, I’ve enjoyed the increasingly dumb antics of the crew from the Jackass films. On the other hand, Tom Green’s weirdo pet project Freddy Got Fingered remains one of the few movies I almost walked out of. Even revered cult classic Pink Flamingos has never been much more than a cinematic endurance test in my eyes.

Unfortunately for me, Belgian import Mother Schmuckers is less Mary and more Freddy with its unfunny bits and horrifically unlikable characters.

Brothers Zebulon and Issachar live a life of debauchery and chaos. When the two lose their mother’s beloved dog, they have 24 hours to find it or risk being thrown out on the street. Along the way, the two run afoul of a grocery store security guard, kill birds with a handgun, and parade a dead body around.

Mother Schmucker’s approach to comedy is throwing everything at the wall and seeing what sticks. Directors Harpo and Lenny Guit definitely aren’t afraid to try anything and everything, even if it means the vast majority of the gags (pun fully intended) fall flat. Everything from force-feeding feces to animal kink shows up at one point or another. This “anything goes” attitude might work for a prank or other kind of reality show, but as a narrative feature it just comes across as unfocused and lazy.

There’s a chaotic energy to Mother Schmuckers that’s undeniable. The movie’s visual aesthetic feels closer to a mid-90s skateboarding video than it does a traditional comedy. The camera moves around almost as fast as the brothers as they scurry from one catastrophe to the next. While it doesn’t necessarily make the movie any better, it does keep it from becoming a complete bore.

I don’t want to sound too puritanical, but brothers Issachar and Zebulon are two of the worst degenerates to ever grace the big screen. I doubt the Guits intended for audiences to embrace these moronic characters, but the lengths to which they go to make us actively hate them is almost impressive. I don’t for a second believe that movie characters need to be likable to be relatable, but these two live on a completely different plane of obnoxiousness and cruelty.

Mother Schmuckers is a pointlessly mean-spirited endeavor. Gross cinema can be good – heck, it can even be great! What it should never be, though, is cruel.