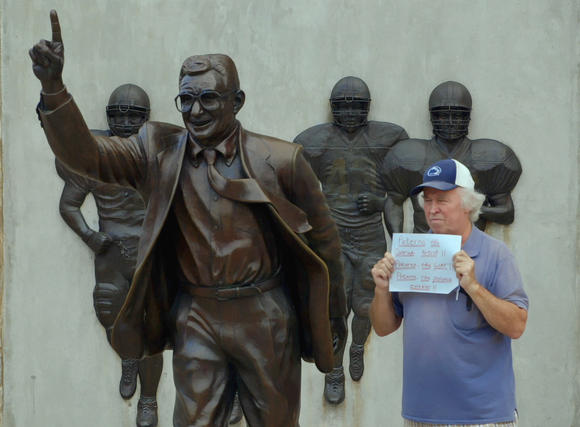 A documentary filled with sordid details of Penn State University’s sexual abuse scandal is, thankfully, not something that Happy Valley is interested in becoming. Instead, writer/director Amir Bar-Lev (My Kid Could Paint That) wisely keeps his focus on the aftermath, and the shockwaves the trial set off in the community.

It is a striking portrait of a community dealing with the realization that they had a monster in their midst, and struggling to balance a devotion to Penn State football with the crimes that were committed within that very program.

Of course, by extension the film becomes a comment on the religion of football in all of America, and how, as one man puts it, “we all want to believe we live in a better world than we do, and it’s pretty easy when there’s a big, shiny, loud spectacle.”

Though Bar-Lev gives the Paterno family a bit too much airtime to hammer home their mantra “Joe did the right thing,” he delivers several even-handed and downright devastating sequences on the dark side of hero worship.

“He knew right where to hit us…our soft spot: art and money.”

Art and Craft is the fascinating documentary on Mark Landis, one of the most notorious art forgers in U.S. History. Over the course of three decades, Landis successfully duped countless museums, bowing to a strange compulsion he seems powerless to control.

The directing team of Sam Cullman, Jennifer Grausman and Mark Becker are able to balance a compelling character study with an art world mystery, crafting a film that does not require an Art History degree to enjoy.

Landis is a fragile soul, and the film treats him as such. Never judgmental, it seems to echo the sentiments of those in the art community who are shown tracking him down. They badly want Landis to stop his forgeries, but can’t bring themselves to treat him impolitely.

At times funny, shocking, and intensely curious, Art and Craft is also a heartbreaking look inside a lonely life, and the lengths to which one might go to find a sense of belonging.

It’s even better when viewed as a companion piece to Big Eyes, Tim Burton’s upcoming look at a very different kind of art forgery.