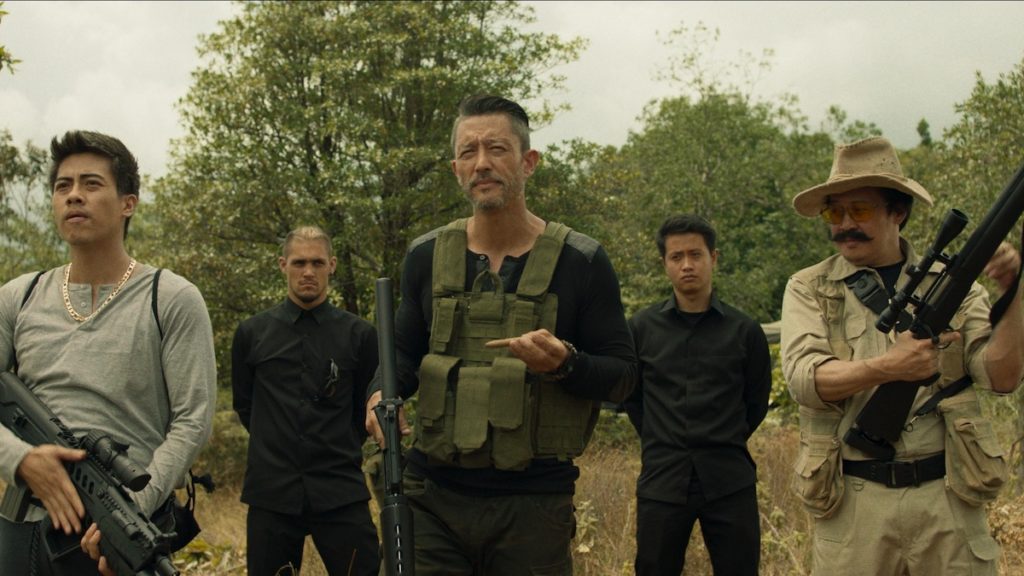 Co-writer/director Jimmy Henderson’s The Prey doesn’t waste any time giving action fans what they want. Fight sequences that are plentiful and inventive. A hero who cuts through adversaries with brutal punches and kicks. Villains that chew the scenery with otherworldly malice. It’s everything we’ve seen dozens of times before, but that doesn’t stop The Prey from being a fun 90 minutes.

Xin (Gu Shangwei) is an undercover Interpol agent who finds himself arrested in a police raid. Thrown into a particularly dangerous prison, Xin catches the eye of a group of murderous hunters who use the jail to select their stock. Released into the nearby jungle, Xin has to rely on his training to evade the heavily armed pursuers.

The “Humans Hunting Other Humans” genre is a well-worn path. From The Most Dangerous Game to Hard Target and The Hunt, the idea that we’re the deer is something that seems to never get old. With The Prey, Henderson delivers a film that doesn’t really offer anything new to the genre, but it does gleefully revel in it.

The action sequences have a nimbleness that allows each fight to remain fresh. Along with exciting fight choreography, Henderson keeps the camera constantly moving during these scenes. While not reaching John Wick level heights of technical prowess, Henderson creates sequences infused with passion, wit and contagious energy.

The winking at the audience doesn’t stop with the action. The Prey’s villains are gloriously over the top. From the sadistic music-loving Warden to the compensating youngster who doesn’t quite have the stomach for killing, our bad guys check certain archetype boxes. Watching these characters ooze a kind of comic sadism helps solidify the film’s playful tone.

Shangwei as Xin doesn’t fare as well as the villains. Like many action stars before him, Shangwei was obviously hired for his martial arts skills, not his acting skills. He delivers in the film’s long fight takes, but struggles to muster much charisma when focusing exclusively on dialogue.

While not breaking any kind of cinematic new ground, The Prey celebrates a decades old genre through technical prowess and excitement.