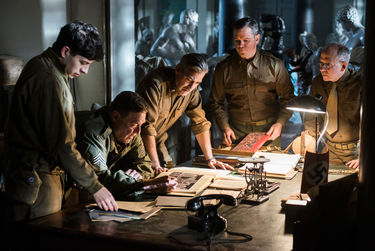 There are many stories in war, some better known than others. With The Monuments Men, George Clooney shines a bright Hollywood spotlight on one of the lesser known aspects of World War II, and manages to make it an informative and entertaining affair.

True, the story of how the Nazis stole countless art treasures in Europe was outlined by the excellent 2006 documentary The Rape of Europa, and 42 years before that, Burt Lancaster tried to keep precious artifacts from reaching Germany in The Train. But the tale of this heroic group is fresh territory, and in adapting the source book, director Clooney and his usual co-writer Grant Heslov again show fine instincts for making a historical drama resonate.

Clooney also stars as the leader of the titular platoon, an older group of art experts called into military service and tasked with rescuing the stolen works and when possible, returning them to the rightful owners. He’s surrounded by a winning cast with plenty of star power, including Matt Damon, John Goodman, Bill Murray, and Cate Blanchett as a suspicious Frenchwoman who becomes very helpful to the cause.

Factual liberties are taken, of course, but give Clooney and Heslov credit for keeping a good heart beating beneath the big-scale production. The heavy toll of war, the enduring power of art, and the souls at the center of each are given due respect, even as the film becomes a nail-biting chase to rescue a priceless Michelangelo before it falls into wrong hands.

As a director, Clooney is a bit more obvious this time out, and there are segments when things becomes a tad too lighthearted, such as reminders of some of the cast’s previous films which may or may not have been intentional.  In fact, the struggle to find a suitable tone is the film’s main weakness, as the cinematic heights Clooney reached in Good Night and Good Luck or The Ides of March are sacrificed to give the film more mass appeal.

But ultimately, The Monuments Men is a tale that deserves a wide audience, and Clooney may prove just the right artist to get that job done.