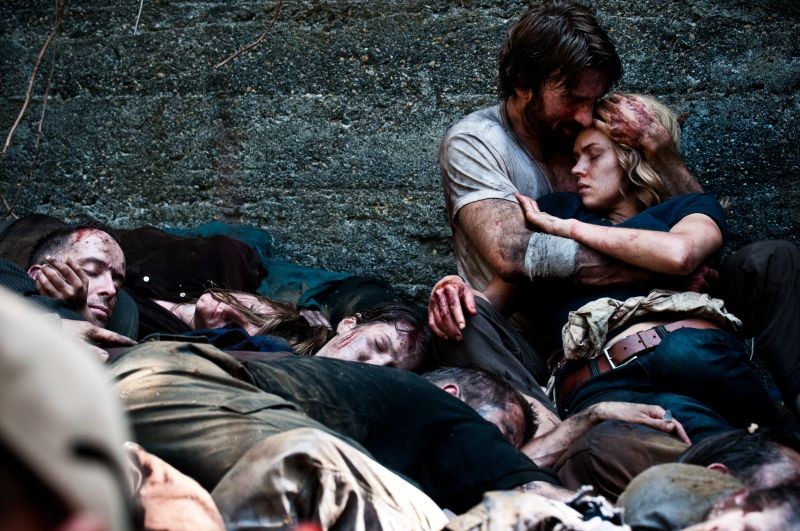 The film Open Grave immediately brings to mind Adrien Brody’s underseen 2010 flick Wrecked. In it, Brody wakes from a car crash in a daunting patch of geography with no memory of who he is or how he got there, but evidence suggests that maybe he’s not the film’s good guy. We spend the next 90 minutes with him as he pieces together clues to his identity and situation and tries to survive pretty inhospitable circumstances.

Likewise, in Open Grave, Sharlto Copley awakens with no memory. He’s not in a car, though. He finds himself deep in a pit atop a heap of dead bodies.

The trajectory is similar, but director Gonzalo Lopez-Gallego does not have a tense man-against-nature thriller in mind. He throws a lot of clues at Sharlto’s confused Jonah, all of them tinged with enough blood and barbed wire that our protagonist doesn’t just believe he may not be a good guy. He knows he may be a very, very bad man.

Jonah is not alone, though. In the house not far from the body pit is a rattled group of amnesiac survivors, all of whom are trying to puzzle their way through the gory evidence to figure out what the hell is happening to them.

There is one other film that clearly inspired Open Grave, but to mention it by name would be to give away too much because the grim clues, anxious sleuthing and varying possibilities keep this film suspenseful and queasyingly entertaining.

Copley, whose career has been an act of diminishing returns since his magnificent feature film debut in District 9, offers a solid, grounded turn here. His characterization evolves as his character’s experiences demand, and Copley conveys the proper instincts at each point in Jonah’s quest for survival.

Screenwriters Chris and Eddie Borey take the cabin in the woods premise and layer it with numerous additional horror tropes to pull together a surprisingly engaging picture. It’s full of grim twists and imaginative surprises….until it isn’t.

Lopez-Gallego keeps his storytelling one step ahead of the audience for most of the journey, but when we catch up and are given the big reveal, the film has too little left to offer. It then falls back on nothing more than standard horror fare, providing an unfittingly clichéd ending to what had been a clever braiding of familiar threads.