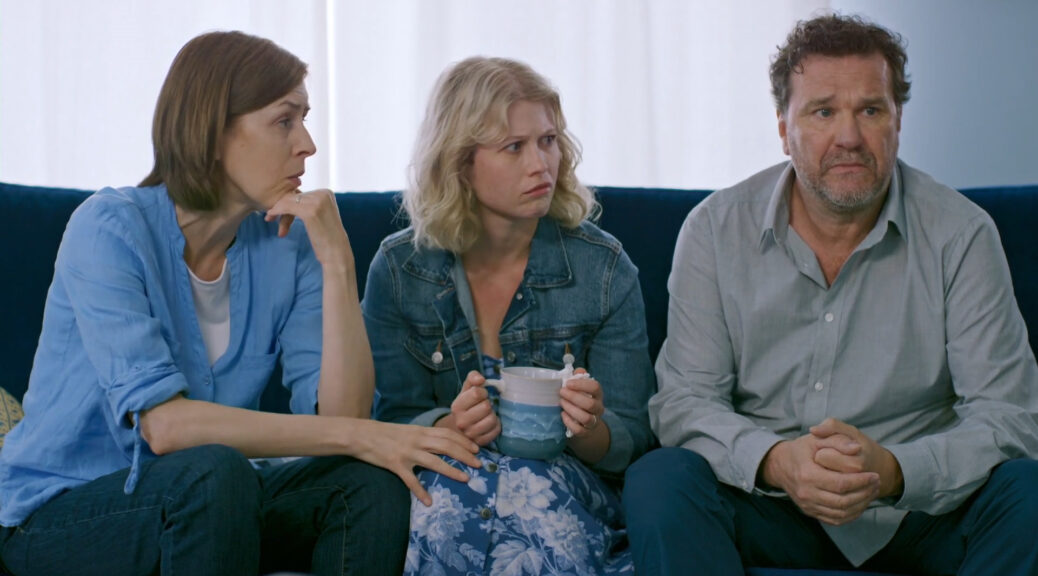 The film opens with a confession, as we quickly learn Ava has fallen for her classmate, Simon (Douglas Hodge). Though both married, their connection grows as the two discover similar dissatisfaction with where life has brought them.

Mining the desires and dizzying highs of illicit love from Romeo and Juliet, Carr-Wiggin applies the famous love (lust?) story to a man and woman in their 50s.

Though not the first film to explore mature love, A Grand Romantic Gesture might be the first to portray Romeo and Juliet as middle-aged. Though the approach is subtly humorous in how it comments that heady love isn’t just for the young, R&J’s smoldering passion just isn’t there. There’s no doubt these characters care for each other, but when the film tries for something more passionate, even reckless, it doesn’t land. Rather than mirroring the high drama of young, forbidden love, it comes across as silly.

Layered onto the story, are Real World-style confessions. The confession room segments might have worked if they’d stayed with Ava, but the snippets become an unnecessary drag on an otherwise steadily rolling story. The things revealed in the confessionals are more artfully delivered via dialogue and body language.

The movie’s tone never decides where to settle, veering from optimism to cynicism with each changing scene. Is one too old to find love? Or does age bring freedom from the pressure of staying for the sake of children?

There are some funny moments in the story, but the dizzying shifts from rom-com to passionate drama are hard to accept. The film might have benefited from a continued light touch in its references to Shakespeare’s famous tragedy.

Though earnest in their roles, McKee and Hodge never successfully convince us of their fervor for each other. Unfortunate for a film with such an ambitious title.