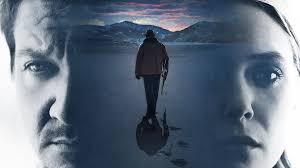 In many beautiful and horrific ways, the scripts of Taylor Sheridan (Sicario, Hell or High Water) felt like a reemergence of Cormac McCarthy.

His lean and often quite mean stories have been blessed with two of the more capable visionaries of modern film (David Mackenzie and Denis Villeneuve) – filmmakers whose camerawork, pacing and sense of urgency hauntingly animated the damaged Americana Sheridan’s stories announced.

With his latest, Wind River, Sheridan takes the helm, borrowing inspiration from both directors.

Another tale of violence, bureaucratic vagueries and the vanishing of American heritage, Wind River certainly feels like a Taylor Sheridan film.

Jeremy Renner plays Cory Lambert, sharp shooter for Wyoming’s department of fish and wildlife. He protects livestock from predators – like the three wolves surrounding a flock of sheep in the scene that immediately follows that of a young girl bleeding and dying alone in a frozen wasteland.

Behind the camera, Sheridan is a bit less subtle with symbolism than he might want to be. In fact, though Wind River spins a compelling murder mystery, it’s far more of a blunt instrument than the filmmaker’s last two – admittedly magnificent – efforts as writer.

Perhaps Sicario and Hell or High Water represent too high a bar for a director with only one feature, the 2011 horror flick Vile, under his belt.

Sheridan doesn’t have quite the touch of Villeneuve or Mackenzie, and without it, his material feels a touch too preachy, a whisper too self-righteous, and most troublingly, too white.

Set on a Native American reservation, Lambert is enlisted to help Olsen’s fledgling FBI agent Jane Banner and an understaffed tribal police department solve the crime behind the girl’s death.

And though Renner brings his grieving hunter to the screen with an aching, restrained performance, it’s hard to understand why the character needed to be white. That piece of casting gives the film a “white savior” tenor that only exacerbates that nagging feeling of misplaced self-righteousness.

Wind River is a fine, if flawed, police procedural. Unfortunately, that makes it a bit of a disappointment coming from Sheridan.