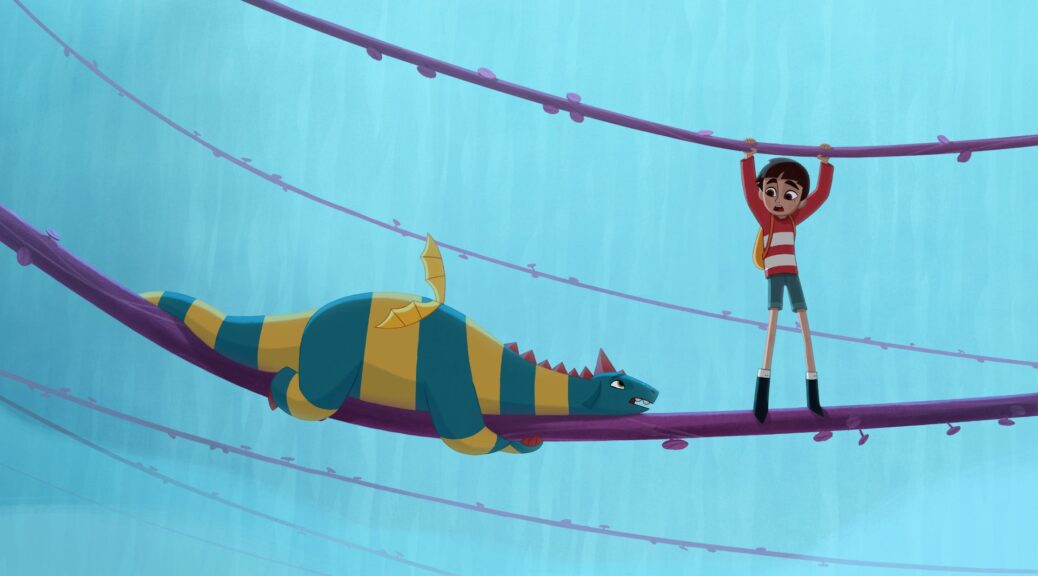 Like most animation fans, I eagerly await each new Cartoon Saloon adventure. Their output is simply stunning: Wolfwalkers, The Breadwinner, Song of the Sea, The Secret of the Kells. Even Pixar doesn’t have a stronger batting average.

Nora Twomey directed two of those beauties, The Breadwinner and The Secret of the Kells (which she co-helmed with Tomm Moore). She returns to the screen with the lovely romp about a dragon with a problem and a boy who solves problems, My Father’s Dragon.

Elmer and his mom have left behind their small town and the little store they ran. They’re living on the leaking top floor of an apartment building in a crowded city. Neither is happy about it, even if both pretend well. Then a talking cat points Elmer toward a chance to fix everything. He just needs to save this one dragon.

Charming and endlessly good-natured, My Father’s Dragon succeeds despite its comparatively predictable nature. Go into any of the other Cartoon Saloon films and you’ll find yourself surprised with each narrative turn. My Father’s Dragon, on the other hand, feels more familiar.

If the studio’s defining uniqueness is missing from its latest ‘toon, its heart is not. Voiced by Jacob Tremblay, Elmer’s the kind of kid who’s wound too tight. He tries so hard, he breaks your heart, even when his anxiety shortens his temper. Elmer’s own personality mirrors his mother’s when the chips are down, which feels of bittersweet authenticity thanks in part to Golshifteh Farahani’s tender vocal performance as Mom.

My Father’s Dragon represents a new direction for the animation studio. While it’s not the unassailable success of their previous films, it’s a joyous, beautiful film.