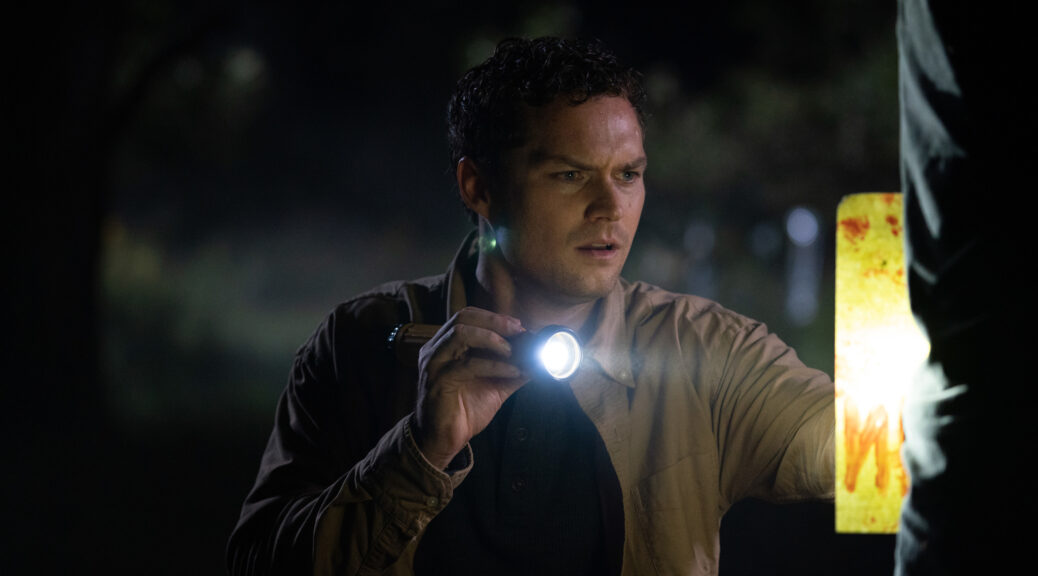 Four years ago, filmmaker Justin P. Lange used our preconceived notions against us to carve out a fresh horror with something meaningful on its mind. He followed his impressive feature debut The Dark with the subpar 2021 exorcism flick The Seventh Day.

This third outing, The Visitor, falls somewhere between the two.

A young married couple moves back to the wife’s hometown when her father dies and leaves her his big, old gothic house. So far, so garden variety.

The pair’s not even unpacked yet when the husband starts hearing noises, then he’s having nightmares, and then he discovers a painting in the attic bearing his own unmistakable likeness.

Still pretty familiar. The truth is, not a single beat in The Visitor feels truly fresh. The film looks great and performances – especially from the supporting cast that includes veterans Dane Rhodes, Thomas Francis Murphy and Donna Biscoe – keep it lively.

Leads Finn Jones and Jessica McNamee benefit from a genre gender reversal. In nearly every film of this ilk, it’s the female who senses that something in this house and this town is amiss while her husband’s too stoic and dismissive to buy in. Here it’s Londoner Robert (Jones) who sees menace in the overly friendly townsfolk, who dreams of cackling old women. His wife Maya (McNamee) grows more and more hostile to his nonsense, especially now that she’s pregnant and they’re ready to start fresh.

Lange does a serviceable job of mashing together solid elements from better films and packing them in gorgeous autumnal shades. His set designer deserves applause for understated Gothic elegance. But it’s not enough.

Lange’s film boasts no real scares, not a single surprise, little dread. It’s a bland if attractive facsimile of other films we’re already kind of tired of.