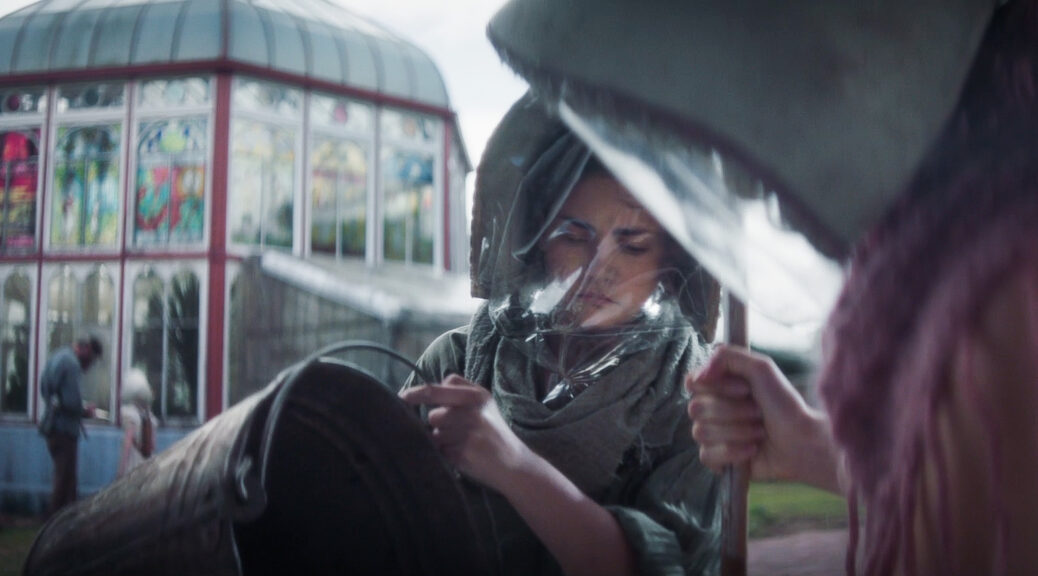 Hidden away in a sanctuary, a mother, her three daughters, and one son do their best to avoid a disease known as The Shred. Glasshouse is the kind of slow burn that drags you in gradually and inexorably. Co-writing with Emma Lungiswa De Wet, director Kelsey Egan knows how to pull the tension like thread through a wound.

Curiosity killed the cat, but it seems Bee (Jessica Alexander) can’t help herself when a stranger stumbles upon the family. While each of the women cares for brother Gabe, who has been affected by The Shred, their mercy has its limits.

A few particularly gruesome scenes make you wonder who to be afraid of in this world.

Egan’s world-building is richly detailed. The youngest girl sings a nursery rhyme with her older brother that centers around the new world. The mother holds a religious service with its own rites and rituals. Stories are told that suggest the world that once was.

The richness of the score and the beauty of the setting enhance the feeling of watching a fairy tale, but every so often something happens to remind us that this isn’t an idyllic other world. It’s a nightmare with no end.

After COVID, which has its cameo, The Shred has a false ring as a toxin. Egan isn’t interested in the realities of disease but in the unreliability of memory. When the world has been stripped away, whose memories are significant? Which ones are important? Does the truth matter anymore?

Each character comes to life in the film, but Anja Taljaard’s turn as Evie is a standout. Adrienne Pearce as Mother also commands the screen whenever she appears. Newcomer Kitty Harris plays a large role in the beginning as Daisy but her presence shrinks as the film progresses, which is a shame since the youngest member of the cast does the best job at convincing us to accept this world for what it is.

With a film that spins so many possibilities, it’s nearly impossible to land on explanations that will satisfy everyone. Some things are better left to the imagination, but it can be hard to leave loose ends untied. The film falls victim to wanting to find some reason for its events. Those reasons will rivet some and disappoint others.

For a film like this, it’s best to enjoy the journey rather than the destination.