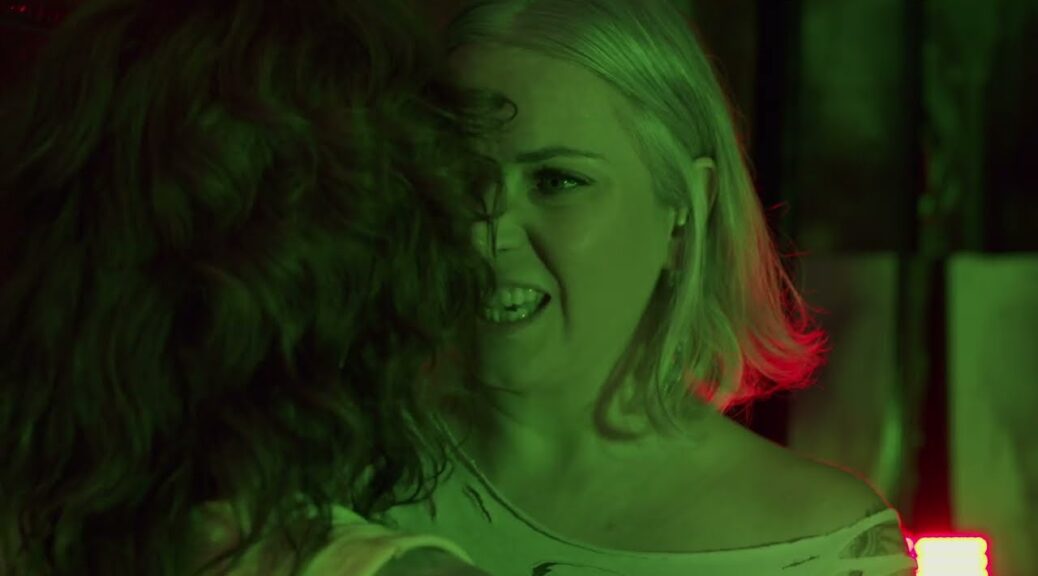 It’s impressive when a film is able to tap into genuine chaos. Director Victor Bonacore’s Thrust! is a punk-rock, spit-soaked, guffaw-inducing ode to don’t give-a-shit cinema. Thrust! isn’t the kind of film concerned with narrative cohesion or deeper themes. No, this movie simply wants to take the audience on the kind of ride you’d only get if your brakes failed.

Thrust! follows lovers Aloe (Erin Brown) and Vera (Allison Egan) as they cross a female-ruled dystopian world to confront and kill the vile Dirtbag Mike (Michael Shershenovich). In their quest to vanquish the elusive Dirtbag, Aloe and Vera encounter various girl-gangs that feature the likes of Linnea Quigley (Return of the Living Dead, Night of the Demons) and Ellie Church (Headless, Space Babes From Outer Space).

Thrust! is the kind of movie you want to see in a packed theater with some close friends and probably a beer or two. The risque nature of the movie feels very reminiscent of early John Waters with equal amounts of Mad Max and Switchblade Sisters thrown in for flavor. While the gross-out gags are inventive and plentiful, they never become repetitious or lose their ability to shock or make you cover your mouth with your fist.

Bonacore infuses the entire movie with an energy other features might have in a scene or two. From a rousing rock & roll opening to blood-spattered fights and gratuitous sex scenes, Thrust! produces one cackle-inducing scene after another. This impressive level of chaotic momentum should make an audience feel over-stimulated, but Thrust! throws just enough twists and surprises to keep the movie from feeling monotonous.

The cast is more than game for the mayhem. As the audience’s entry point to this world of debauchery, Brown and Egan do a good job with two of the less flashy roles. Shershenovich makes a mean impression as the vicious Dirtbag Mike – a role where scenery chewing was probably encouraged on a daily basis.

Thrust! certainly isn’t for the squeamish, and it might even test the limits of exploitation cinema veterans. Vulgarity aside though, Thrust! is one heck of a fun time at the movies.