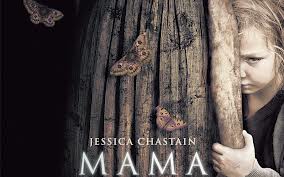 Slim pickins in new release this week, but if you’re looking for something spooky, Jessica Chastain’s spectral thriller Mama is your best bet.  Thanks to the impressive performances of its youngest cast members, this supernatural tale of feral orphans generates true dread. Heartbreaking, pensive and convincingly creepy, the wee ones steal the film in a disturbing way. Their stellar work is nearly undone by a lackluster title character, but for about 2/3 of its run time, Mama is a keeper.
For a much stronger voyage into spectral horror and creepy children, try the 2007 Spanish gem The Orphanage. Elegantly filmed, atmospheric and deeply creepy, The Orphanage recalls such genre greats as The Devil’s Backbone, The Others, and The Innocents. Is a mother so distraught over the vanishing of her son that she’s seeing ghosts, or is there something more sinister afoot in the old orphanage she bought? It’s a haunted house tale that manages to be familiar, surprising and, most importantly, spooky.
And, of course, for the real Slim Pickens, cue up Dr. Strangelove or Blazing Saddles!