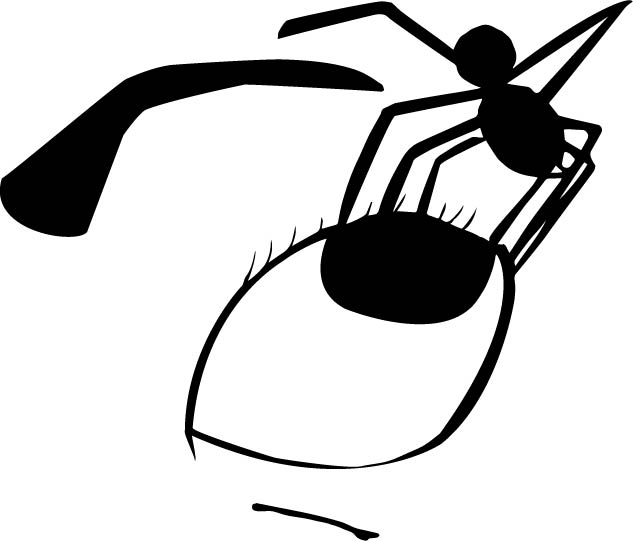 Oh No, Not Again

I’ve always had a thing about my eyes. Which is why having a small spider land on my left eyeball recently effectively ruined my day.

There’s a primordial memory floating around in my brain of my mother sitting on my toddler body, pinning my arms to the carpet with her knees while my father wrenches open my eyelid in an attempt to apply medicinal eye drops to combat a bad case of pinkeye.

I’ve loathed the concept of anyone’s wriggling fingers getting anywhere near my sockets ever since.

Unfortunately, this aversion was rather inconvenient as my eyesight started to deteriorate in elementary school. I knew what would happen if folks found out that I had trouble seeing the blackboard. They’d take me to that office where the people forced my head back against the chair and tried to wrangle stinging liquid under my clenched eyelid.

I became sneaky. When adults came into the room, I’d yank the book that I held three inches from my face out to a respectable distance and pretended to read until they left. I’d try to get into the classroom early and casually stand next to the blackboard to glean any information that was there. I’d get into fights with kids sitting next to me so that I’d have to be moved up to the front row, next to the teacher’s desk, so she could monitor my behavior. On vision test day, I’d memorize the eye chart while waiting in line and recite it as best I could when my turn came.

But, despite my best attempts at childhood subterfuge, I was eventually found out and by middle school I was outfitted with the thickest pair of glasses I have personally ever seen a human being wear. I’m sure there are people out there with stronger prescriptions. I assume they are legally blind.

In middle school I attempted to get contacts. Unfortunately, in order to get fitted for contacts you have to let someone touch your eyes to measure them. Despite my appearance-driven motivation and the assistance of several eye doctor staffers holding me down, I was unable to let anyone measure me for the contacts, much less put one in.

I attempted to train myself at home by putting a drop of water on my index finger and slowly trying to introduce it to my eyeball. The few times I managed to keep my eye open and accomplish this, the feel of the water against my eyeball caused me to fling my body across the bathroom and crash into the closet door. Eventually my parents asked me to stop, fearing for the structural integrity of their bathroom.

So, when the laser eye surgery option came along I was determined to get it. This was not only my chance at escaping the magnifying glasses permanently strapped to my face, this was an opportunity to avoid ever having to go to the eye doctor again. I made an appointment, asked them for a ton of valium, let five people pile on top of me to put the Clockwork Orange eye prier-opener on me, and then slice off the top of my cornea and shoot a laser into each eyeball for a full minute.

The next morning, I could see. A miracle. No one was going to need to get their fingers near my face for the rest of my life.

Until I somehow managed to get an arachnid under my eyelid.

I was trying to take the trash out back to the Columbus-issued trashcan. In order to do this, I needed to pass through the gate of my privacy fence and go around to the alley behind my house where the trash can lives.

I suppose an inexperienced juvenile spider must have been building a web in between the fence and the gate and I broke the web when passing. All I know is a black speck appeared to get slightly bigger as something sailed into my eye.

Dropping the garbage bag to the pavement, I shrieked and flattened myself to the walkway as if somehow assuming a prone position could possibly help. My hands cupped protectively over my eye socket as I rolled on the ground. Then I felt movement. Suppressing a desire to vomit, I sprang to my feet and bolted toward the house, screaming incoherent guttural sounds.

I raced into the bathroom and looked in the mirror. Snot and tears everywhere. Screwed up left eyelid. Dragging in a ragged breath and, bracing one foot behind me so I wouldn’t fling myself backwards, I used both hands to pry open my eyelid.

Inside just peaking out from under my eyelid, I saw it: black and with entirely too many legs.

I screamed and shot back, falling over the edge of the bathtub and collapsing into it, my head striking the wall. I had a spider in my eye and was alone in the house and likely would be for hours. I had to remove it myself.

My first attempt at spider-extraction was to run tepid water into my cupped palms and lower half my face into it while straining to keep my left eye open, mumbling, “ohmygod, ohmygod, ohmygod,” over and over. This proved to be unsuccessful.

So I ran to the kitchen and grabbed a large stock pot and filled it with water. Pulling my hair back into a quick ponytail, I submerged my entire head in the pot. I shook my head from side to side to try to dislodge the persistent interloper. No dice. In an attempt to scream I inhaled some water.

Sputtering and now thoroughly damp, I surveyed my eye in the mirror. Spider was still there, appearing to wear my eyelid as a blanket.

By now the adrenaline of my initial series of panic attacks had metabolized. I was tired, defeated and disgusted. I raised my hands to my face, took a deep breath and on the exhale screamed and flipped my eyelid inside out. I flicked at the spider, sailed back into the bathtub at the feel of my finger grazing the sensitive inside of my lid, and prayed for death.

After a minute, I extricated myself from the tub, stood, and saw a tiny exoskeleton on the white bathroom tile.

I lifted my foot and stomped the shit out of it.

Later, I made a phone call I’d hoped never to have to make again. “I need an appointment,” I said. “Somehow I got a spider in my eye and I need the eye doctor to check it out.”

After the receptionist stopped laughing, I said, “And make sure a lot of people are working that day. It’s going to take at least a few of you to pin me down to get the eye drops in.”