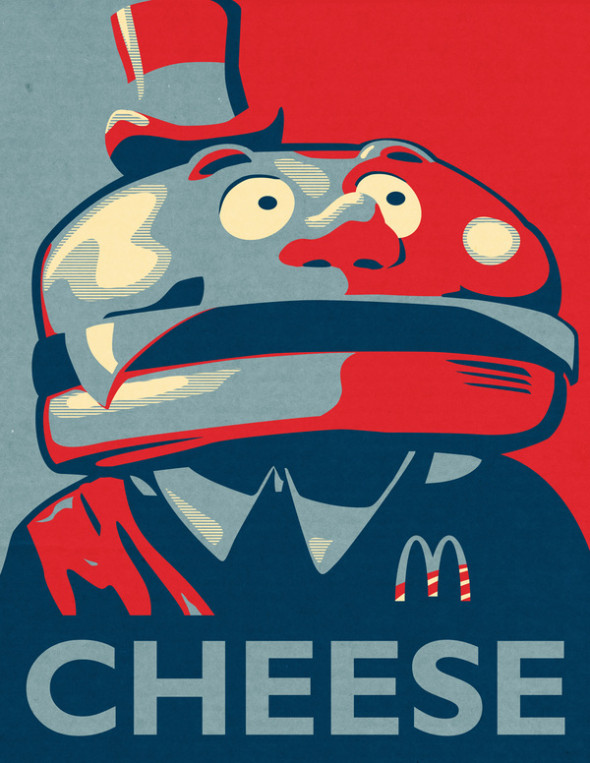 What Would Mayor McCheese Do?

My husband joined 4Square, in case anybody needs to know whether we’re at the movies or at Chipotle. We are always at one or the other.

In fact, he’s checked in from the Chipotle nearest our house so often that he was recently named mayor via 4Square. Apparently a cyber-mayor needn’t adhere to any kind of platform, and an honest one-man-one-vote election is needless. Just like in real life!

This makes me Chipotle’s First Lady. It’s the role I was born to play! Would there be a tinfoil crown and scepter, I wondered with glee.

Meanwhile, George mulled new Chipotle legislation. His first bill would outlaw the extra small serving. Burritos the size of a human head – that’s what we’re looking for. It is Chipotle, is it not?

He calls it the No Scimpasaurus Bill.

In retrospect, maybe his first act as mayor should have involved the parking situation. Like many Chipotle lots, the parking at the Grandview site is strictly kill or be killed.  Within minutes of his strictly imaginary swearing in ceremony, we witnessed a parking lot tragedy.

We watched through the window as a couple in a pick-up hit George’s new Harley. Less than 1000 miles on it. They just took a weirdly wide turn when pulling out of their space and bashed right into it.

Don’t they know who he is? What’s the point of pretend-governing a local Mexican fast food joint if the citizenry will wantonly damage your really nice motorcycle?

Of course, Mayor McCheese always had the Hamburglar to deal with.  Restaurant politics will kill you.