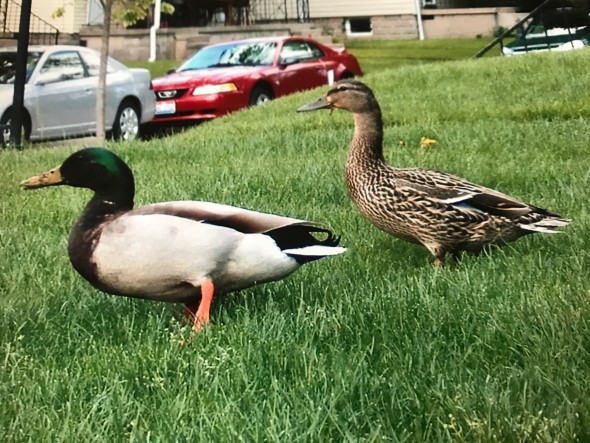 We were starting to think we had new pets. We had one already – a cat named Zappa. She’d been with us forever, rescued from Cat Welfare years ago when we were apartment dwellers and couldn’t have a dog. At the time, we felt like our 2-year-old son Riley needed a buddy.

A million years later, we still didn’t have a dog because Zappa was a 16-year old deaf, toothless cat who refused to eat anything but scrambled eggs and lunchmeat and really wasn’t adaptable enough for a sibling. 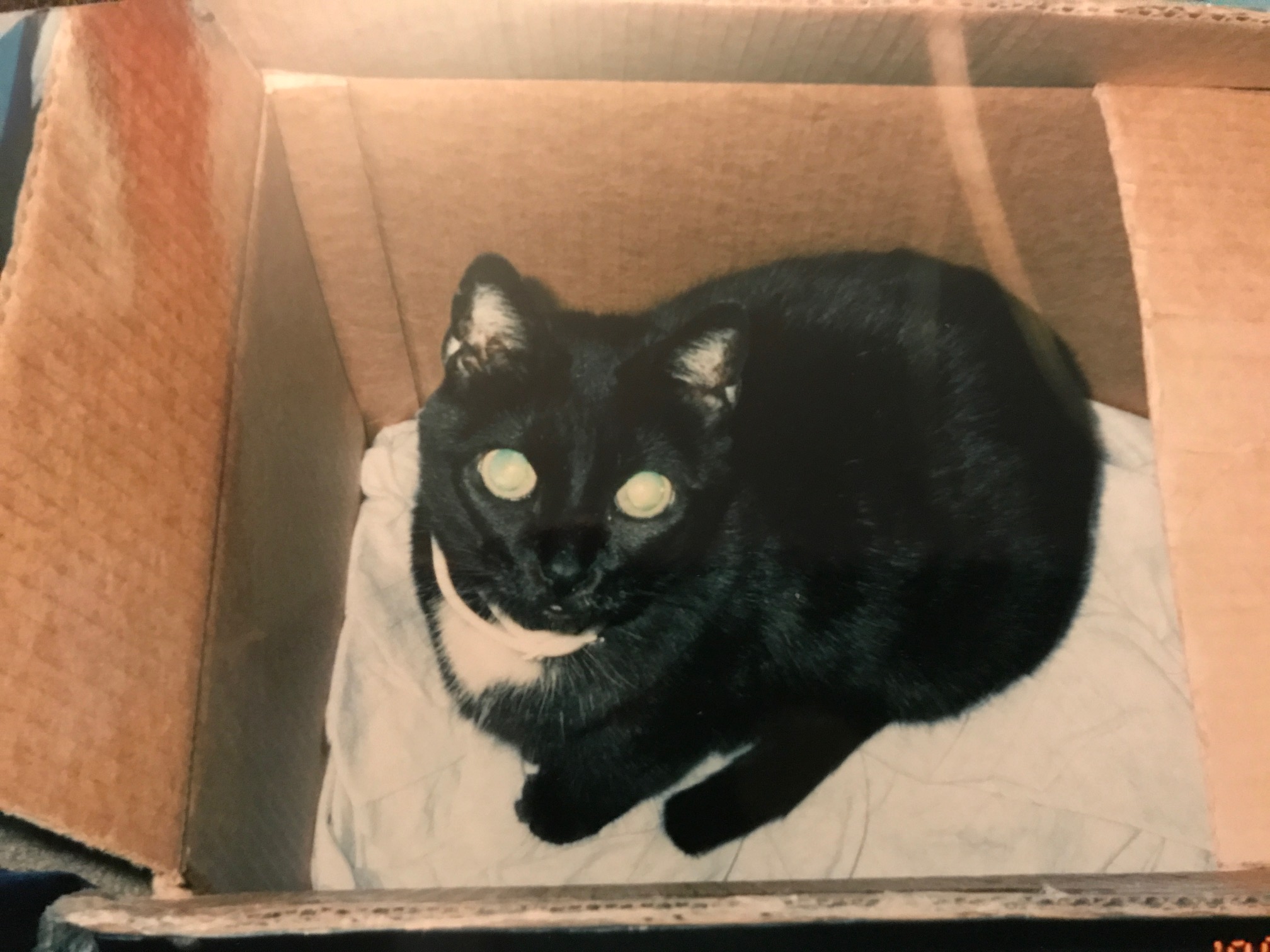 Since she was allergic to fleas, however, Zappa never went outdoors, so an outside pet or two would be OK.

But the heartbreak of outdoor pets, especially those that choose you rather than those you purchase, is that sometimes they waddle around in your pool and eat your store-bought feed and then fly away, never to return.

A mallard couple began hanging around our street in Grandview one spring.

They’d show up in the morning, loiter all afternoon, then fly away at night. There were sightings all over the neighborhood, and then, little by little, the waddling twosome zeroed in on a single yard for passing their daylight hours. Ours.

We have a small front yard far from any known body of water, so we hadn’t a clue s to why the ducks kept returning. We tried not to disturb them too much – made sure we entered and exited by way of the back door, scattered some birdseed for them. They seemed to appreciate it day after day, week after week, and we got used to seeing them. 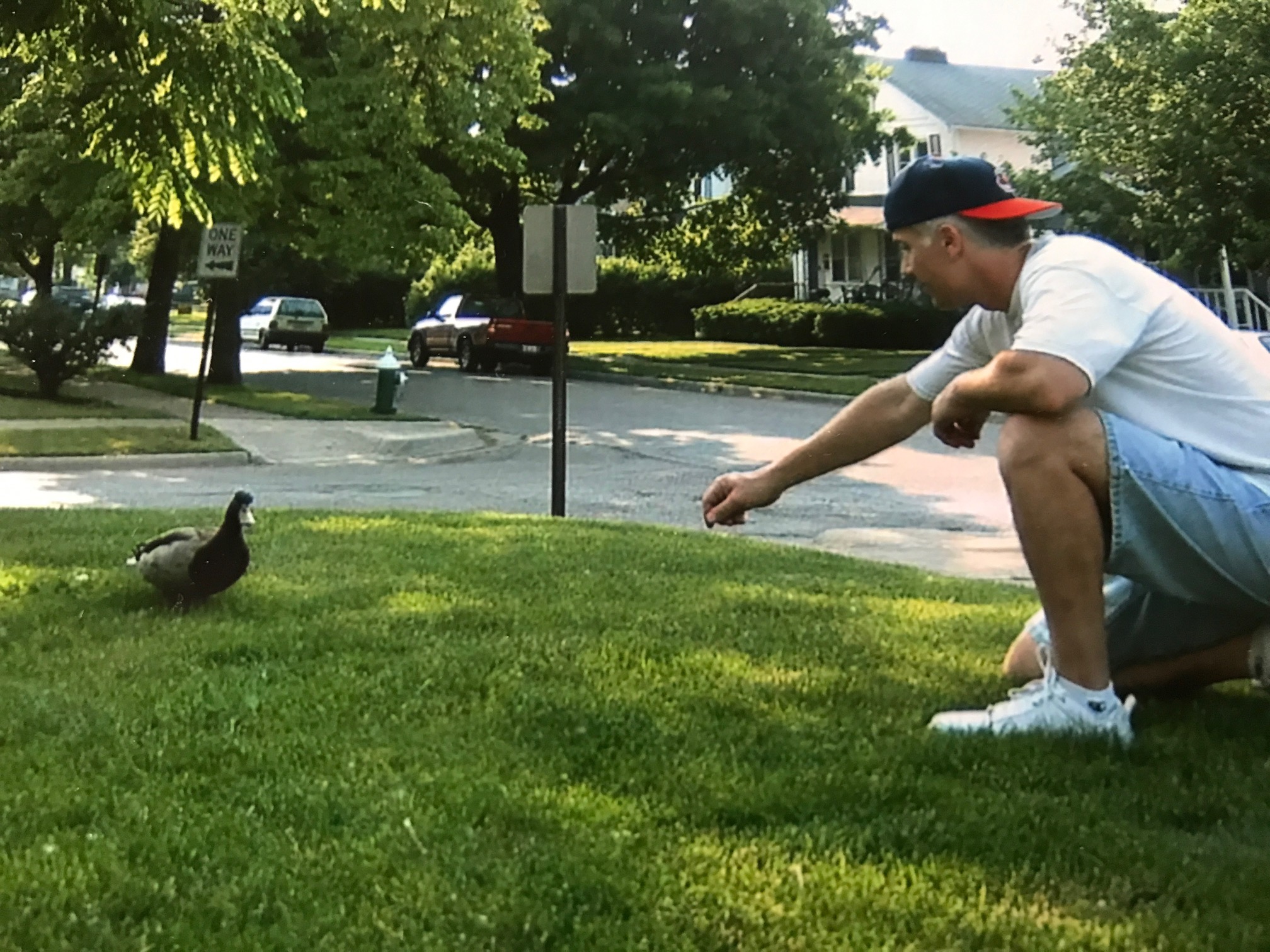 The female would hide between two little bushes, and the male would sit in the middle of our front yard. We took it that he was guarding her, and we hoped she was making a nest.

We had become too attached. In fact, my husband, George, went the wild bird store to find out what was the best kind of feed for Gary and Fiona.

Yes, our son gave them names.

Once you name them, you’re doomed.

They seemed to like us, too. I think their favorite was George, who would approach them gently, shaking his jug of wild duck feed, and Gary would waddle right up to him.

In fact, I came home from work once to find a blue Scooby-Doo wading pool in my small front yard. Some might consider it unusual for a grown man whose only child was in high school to buy a toddler’s pool; others might find the thing an eyesore. 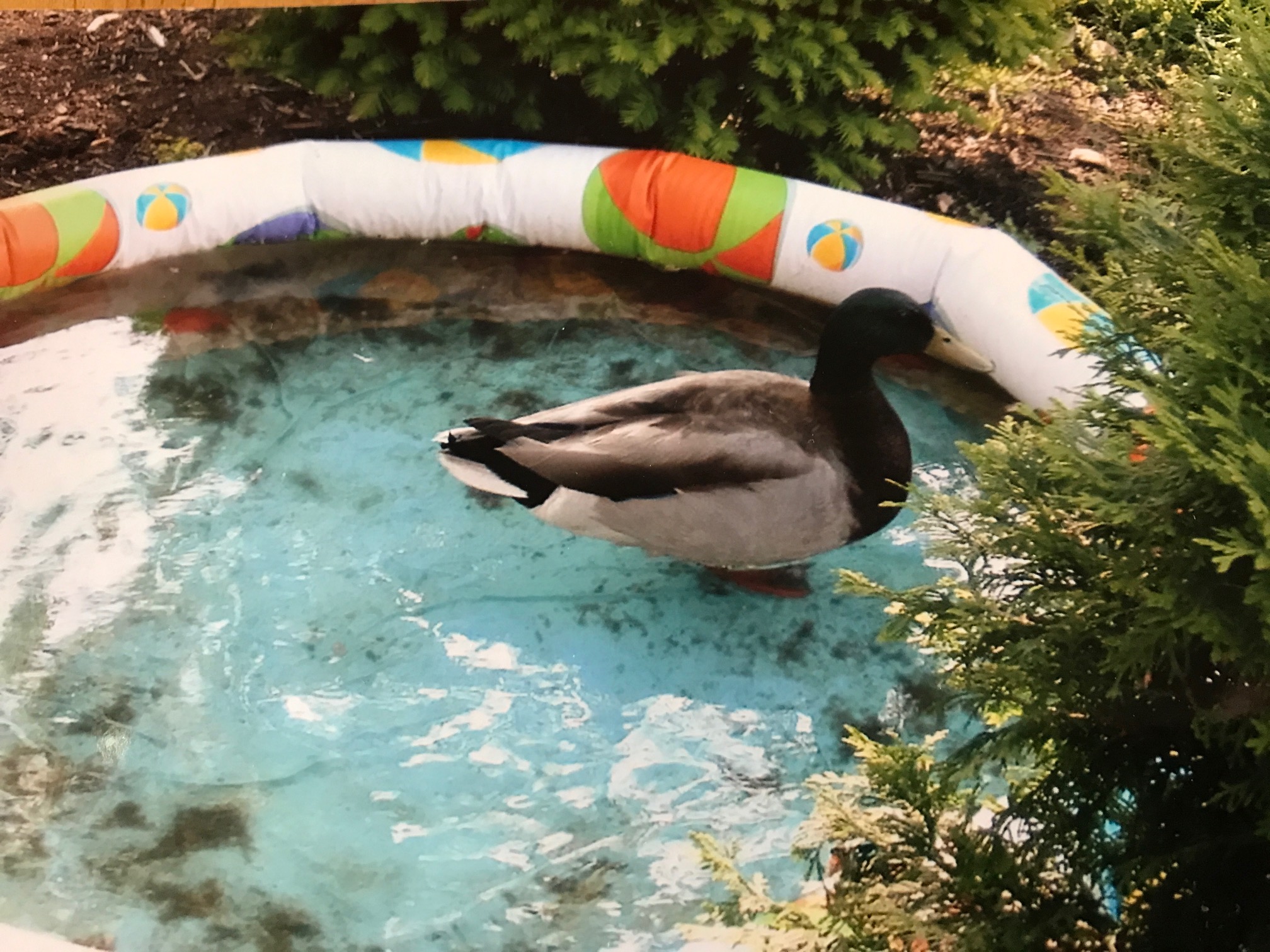 Nonetheless, there it was, and Fiona seemed pleased. So much so, the couple threw a few pool parties. We began to see a second female, Simone, who would show up to splash around.

We became mildly famous in the neighborhood- like those people who string too many Christmas lights, causing mild traffic jams.

We occasionally found children in our front yard trying to pet or catch Gary. We shooed them away, sometimes unpleasantly. As it turns out, we liked Gary and Fiona better than the neighbor kids.

I came home one day to find a teenage girl sitting in my front lawn, trying to coax Gary onto her lap. Her embarrassed boyfriend waited on the sidewalk. When he saw me, he said nervously, “My girlfriend likes your ducks.”

I told him thanks, but they weren’t my ducks. They just hung out in my yard. Like his girlfriend.

Shockingly oblivious and absorbed in her commune with nature, she asked me where I’d gotten them. I said again that they weren’t mine, to which she replied, “So I could just take on?”

I was nicer than George, though, who found this menacing neighbor boy chasing Gary around the yard. George shouted and then chased him down the street. It was outstanding.

We even received a complaint from a concerned citizen who told us we had no business keeping wild animals. Of course, we weren’t keeping them at all. They didn’t live with us; they were just well-liked squatters. 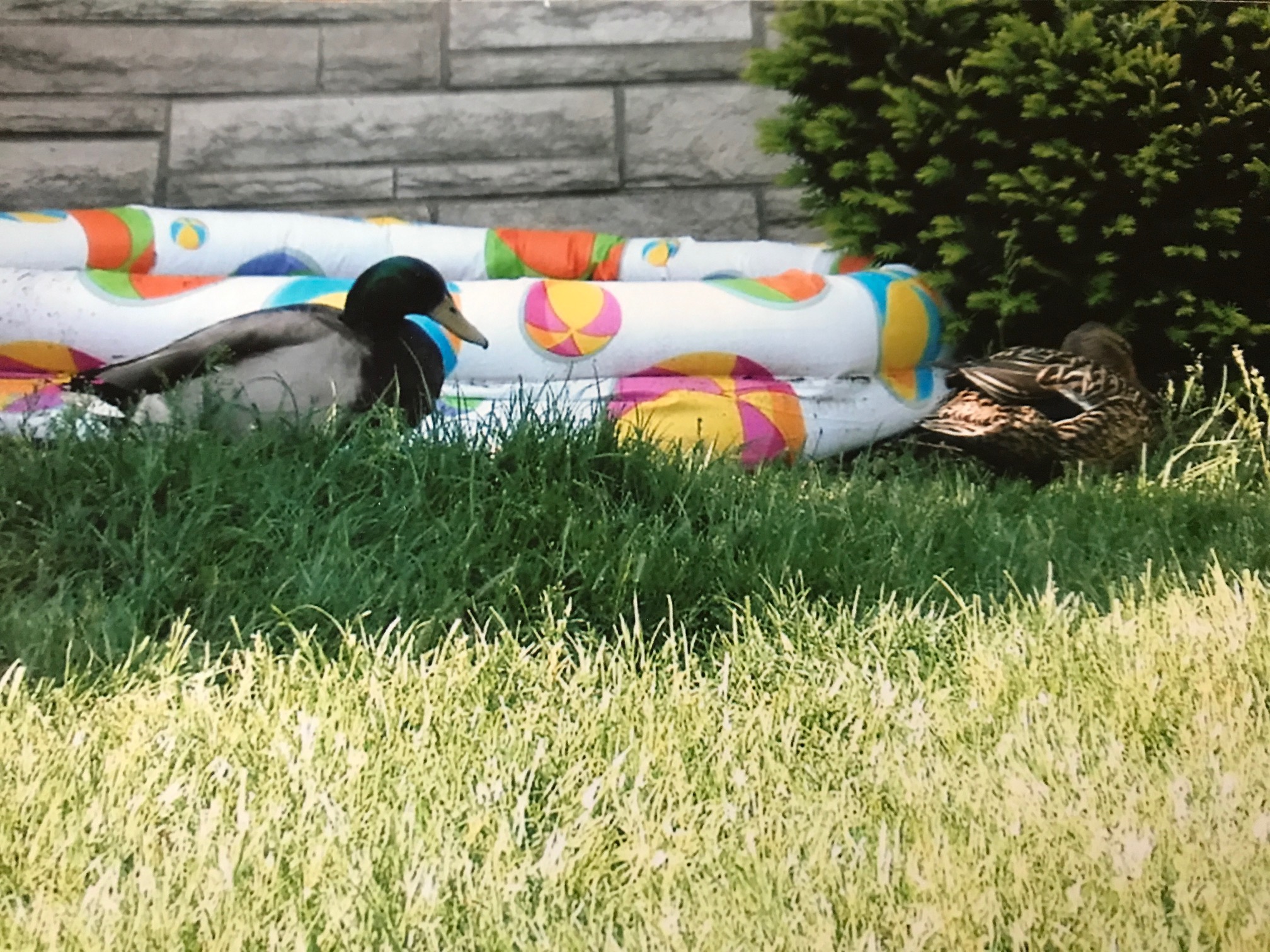 Then, they flew off one evening never to return.

For weeks George would listen for their quacking in the morning when he got up for work, but all we had left was a half-empty Scooby-Doo pool in the front yard and a half-full jug of duck feed on the back porch – and the memory of the heartbreakers who decided suburban life was not for them.

But we’re keeping an eye on this possum we’ve seen hanging around the garbage cans.

Maybe he could love us.

We’re thinking of calling him Craig.

← I Don’t Want to Go Out – Week of July 25
The Screening Room Podcast: Air, Land and Sea →
Scroll Up